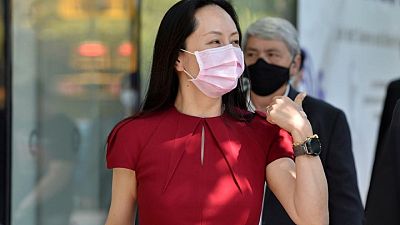 VANCOUVER – Canada’s Prime Minister Justin Trudeau said a Chinese court’s sentencing of Canadian businessman Michael Spavor to 11 years in prison for espionage on Wednesday was “absolutely unacceptable” and called for his immediate release.

The ruling comes as Huawei Technologies CFO Meng Wanzhou’s U.S. extradition hearings have entered the final stretch in a Canadian court, a case that cast a chill over diplomatic ties between Beijing and Ottawa.

Here is a timeline of Meng’s extradition case.

AUG. 22, 2018: A New York court issues an arrest warrant for Meng to stand trial in the United States.

DEC. 1, 2018: Meng is arrested by Canadian police in Vancouver as she changes planes. The arrest is not made public until Dec. 5. The Chinese embassy in Canada demands her release.

DEC. 6, 2018: Chinese officials say they have not been given a reason for Meng’s arrest. The White House and Trudeau both move to distance themselves from the arrest.

DEC. 7, 2018: Court proceedings show that the United States issued the arrest warrant because it believes Meng covered up attempts by Huawei-linked companies to sell equipment to Iran, breaking U.S. sanctions against the country.

DEC. 8, 2018: China threatens Canada with consequences if it does not release Meng.

DEC. 11, 2018: Meng is released on bail to house arrest in Vancouver by a British Columbia court. U.S. President Donald Trump tells Reuters he will intervene in the case if it would serve national interests.

JAN. 22, 2019: The U.S. Justice Department announces it will formally seek the extradition of Meng to the United States.

JAN. 26, 2019: Trudeau fires John McCallum, Canada’s ambassador to China, after he tells Chinese-language media Huawei can make a good case against extradition, thanks in part to Trump’s comments about his willingness to get involved.

MARCH 1, 2019: Canada approves the extradition order of Meng to the United States.

MARCH 6, 2019: China says it found “hazardous pests” in Canadian canola samples and blocks most shipments of the crop.

JULY 15, 2019: Canada postpones decision on whether to allow Huawei to build a 5G network in Canada.

MAY 27, 2020: A British Columbia Supreme Court judge rules the charges against Meng met the legal standard of double criminality, meaning they could be considered crimes in both the United States and Canada.

AUG. 25, 2020: The Canadian court blocks Meng’s lawyers push for the release of further documents relating to her arrest.

SEPT. 28, 2020: Hearings begin on whether to allow Meng to add a new allegation of abuse of process to the case.

OCT. 8, 2020: British Columbia Supreme Court judge mostly agrees with Canada that Meng does not have the right to more disclosures, with the exception of a portion of one email.

OCT. 26, 2020: Cross-examination of witnesses on the second branch of abuse of process starts.

NOV. 16, 2020: A further two weeks of witness cross examination starts, during which Canadian border agents testified defending their decision to first interrogate Meng before letting the federal police arrest her. Huawei’s lawyers questioned the witnesses on the circumstances surrounding her initial interrogation and claimed the federal police violated her rights by passing identifying details of Meng’s electronic devices to U.S. authorities.

AUG. 4, 2021: Meng returns to the courtroom for the final weeks of her hearings, which will initially focus on the third part of her lawyers’ arguments, specifically that U.S. prosecutors materially misrepresented the case against her in their extradition request to Canada.