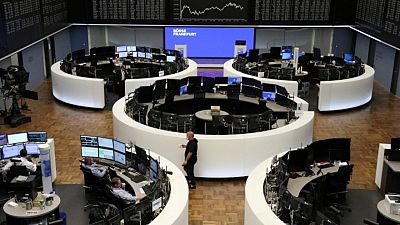 Global shares also hit a record high following in step with the S&P 500 index after data showed U.S. consumer price rises slowed in July, allaying fears that the Federal Reserve will imminently signal a scaling back of bond purchases. [MKTS/GLOB]

“It’s good news. It helps keep the Fed on the couch. It is rising but at a slower rate,” said Jack Ablin, chief investment officer at Cresset Capital Management in Chicago.

“Obviously it is one data point but this is the first series that at least has a glimpse of the Delta variant.”

European equities have eked out record highs recently, shrugging off worries about tighter monetary policy and a surge in the Delta variant of the coronavirus, particularly in Asia and the United States.

In earnings, Dutch bank ABN Amro gained 8.6% to the top of the STOXX 600, after it said it would resume dividend payments as an economic recovery helped a stronger-than-expected bounce in net profit.

Analysts are predicting a record 148.1% jump in second-quarter profit for companies listed on the STOXX 600, as per Refintiv IBES data, versus a 104.3% rise forecast at the start of the earnings season.

UK cybersecurity company Avast climbed 3.1% after U.S. rival NortonLifeLock Inc agreed to buy the company for up to $8.6 billion.

British food delivery company Deliveroo’s value of orders doubled on its platform in the first half of the year, but its shares fell 6%, with a trader citing signs of slowing growth in Europe and “conservative” guidance.