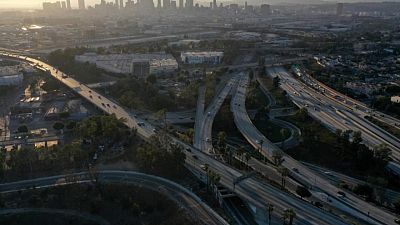 By Makini Brice and Susan Cornwell

WASHINGTON -Hours after the U.S. Senate approved a $3.5 trillion budget blueprint chock-full of investments in new domestic programs, fissures emerged between the moderate and liberal wings of the Democratic Party over the size and scope of the spending.

Manchin, who often acts as a bridge between his party and Republicans, voiced concerns about potentially “grave consequences” for the nation’s debt as well as Washington’s ability to respond to other potential crises.

That followed Democratic Senator Kyrsten Sinema’s warning that she does not support the $3.5 trillion price tag but would work “in good faith” to develop an alternative to include in implementing legislation.

The plan addresses key Democratic priorities, including climate change and immigration reform, and would create social programs such as universal preschool education and subsidized home healthcare for senior citizens. Progressive members of the House of Representatives have warned they will not back the bill unless it has enough funding for those goals.

Democrats hold extremely narrow margins in both chambers of Congress, with just one Democratic “no” vote in the Senate or a handful of them in the House enough to doom the bills.

The Senate approved the $3.5 trillion budget plan in a 50-49 vote along party lines, about 14-1/2 hours after passing a $1 trillion infrastructure bill https://www.reuters.com/world/us/whats-us-senates-bipartisan-1-trillion-infrastructure-bill-2021-08-03 in a bipartisan 69-30 vote, proposing to make the nation’s biggest investment in decades in roads, bridges, airports and waterways.

Democrats plan to pass the larger package within the next few months, using the “budget reconciliation https://www.reuters.com/world/us/us-senates-reconciliation-process-its-not-way-it-sounds-2021-08-10 process,” which allows them to pass legislation with a simple majority vote.

Democratic Senate Majority Leader Chuck Schumer said he believed his party would stick together on the package.

“And I can tell you this: In reconciliation, one, we are going to all come together to get something done. And two, it will have every part of the Biden plan in a big, bold, robust way,” Schumer said.

House Majority Leader Steny Hoyer, a Democrat, said the House would suspend a summer break on Aug. 23 to consider the budget resolution.

Manchin and Sinema voted for both measures.

But this fall, when negotiations go into full swing on the implementing legislation, the two legislators likely will roil the waters if they and moderate House Democrats try to shrink spending.

The trouble has been brewing for months. In a May 17 letter to House Speaker Nancy Pelosi and Schumer, a group of 59 House Democrats referred to new investments in the range of $7 trillion to $9.5 trillion.

For its part, a bipartisan group of House moderates is demanding that Pelosi promptly hold a vote on the $1 trillion infrastructure bill.

Democratic Representative Stephanie Murphy, a member of the “Problem Solvers Caucus,” urged her to schedule it for this month.

“While I support passing a targeted reconciliation bill to help FL (Florida) families, we shouldn’t hold infrastructure hostage to it,” she tweeted.

That is at odds with Pelosi and progressives, who demand that the $1 trillion infrastructure legislation and the $3.5 trillion in additional spending move in tandem to ensure that both get through.

Representative Pramila Jayapal, the Congressional Progressive Caucus chair, warned in a tweet on Tuesday: “Progressives have made it clear from the get go: We’re not voting for the smaller infrastructure bill in the House until the larger jobs and families package also passes the Senate.”

Dozens of Republican senators also signed a pledge not to vote to raise the nation’s borrowing capability when it is exhausted in the autumn to try to curtail Democrats’ spending plans.

“They (Democrats) shouldn’t be expecting Republicans to raise the debt ceiling to accommodate their deficit spending,” Senator Ron Johnson, a Republican who circulated the pledge, told the Wall Street Journal.

Biden expressed confidence the matter would be resolved. “They’re (Republicans) not going to let us default,” he told reporters.

During a conference call with House Democrats, Pelosi rebutted Republicans, saying the debt limit increase would cover past spending.

“This is Trump’s money (spent),” Pelosi said, according to a source familiar with the conversation. “This is paying for his tax scam, this is paying for COVID, a responsibility we all share.”

U.S. borrowing swelled by almost 40% to nearly $28 trillion under Republican former President Donald Trump, fueled by the passage of tax cuts in 2017 and coronavirus-related spending in 2020.

Failure to increase or suspend the statutory debt limit – now at $28.5 trillion – could trigger a federal government shutdown or a debt default.