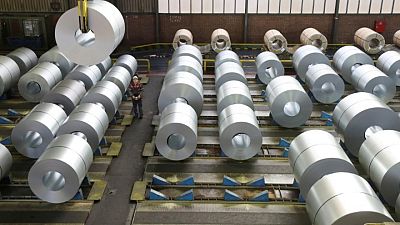 FRANKFURT -Thyssenkrupp on Wednesday flagged a cash gap of up to 1.5 billion euros ($1.8 billion) for its full year, citing restructuring costs and higher investments, as the German conglomerate continues efforts to streamline its businesses.

Shares of the steel-to-submarines group fell as much as 7.7% on the outlook for free cash flow before mergers and acquisitions, which is now expected to be a negative 1.2-1.5 billion euros in the year to September.

Thyssenkrupp, which reported third-quarter results that showed a marked improvement from the year-earlier period, had previously forecast the cash gap would narrow towards negative 1 billion euros from negative 5.5 billion last year.

The company is in the middle of an overhaul to simplify its structure after years of underperformance to focus on businesses such as materials, automotive, plus its hydrogen division, which CFO Klaus Keysberg said could be partly sold.

The turnaround this year is incurring restructuring costs in the low to mid triple digit million euro range.

Thyssenkrupp has also raised investment in future growth at its operating divisions by 2% to 854 million after nine months, mostly due to its steel business, which could be spun off next year if the current overhaul is successful.

Keysberg said a decision on the future of the steel business, Europe’s second-largest steelmaker after ArcelorMittal, would not be made before spring 2022. He also said it depended on the level of external support to manage a shift towards green steel.

The division’s adjusted earnings before interest and tax (EBIT) stood 19 million euros in the third quarter, compared with a 309 million loss a year earlier.

“This is a good thing, but our long-term contract structures mean there is a delay in increased raw material and steel prices feeding through to our revenues and earnings,” Keysberg said.

Long-term steel contracts mean market developments take about half a year before showing up in Thyssenkrupp’s accounts, separating it from peers such as Salzgitter, which on Wednesday posted its highest first-half pre-tax profit in 13 years.

On a group level, Thyssenkrupp’s adjusted EBIT came in at 266 million euros, compared with a 693 million loss last year.