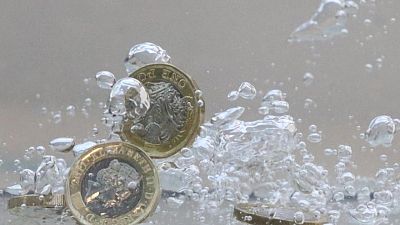 LONDON -Sterling reversed course and rose on Wednesday after three days of losses against the dollar, which slipped after the release of U.S. inflation data and dovish comments by Fed policymaker Thomas Barkin.

Sterling also traded just off 18-month highs against the euro, though moves were limited as traders held off major bets ahead of British GDP growth figures due a day later.

The British currency earlier touched two-week lows against the greenback, which has been buoyed in recent days by impressive U.S. jobs data and remarks by Federal Reserve officials about tapering bond buying and, eventually, raising interest rates, sooner than policymakers elsewhere.

But the dollar slipped after data showed annual U.S. inflation at a slightly above-forecast 5.4%. After excluding food and energy, price growth slowed to 0.3% versus 0.9% in June

“If we get a run of really strong data from the UK over the next month or so, I suppose maybe we could see the market bring forward a little bit more the timing of the first 10 basis points of rate hikes from the BoE,” Stephen Gallo, European Head of FX strategy for BMO Capital Markets, said.

UK second-quarter GDP figures due on Thursday could determine the currency’s direction, with a Reuters poll predicting a 4.8% expansion.

Against the euro, sterling was flat to 84.66 pence., having risen on Tuesday to its highest since February last year.

The euro had been pressured by a ZEW survey showing a third straight month of deterioration in German investor sentiment though it firmed against the dollar after the CPI data.

Some analysts reckon the GDP data won’t buoy sterling much further. Deutsche Bank suggested UK growth would slow to around 2% in the next quarter.

“This would also spell some downside risks to the BOE‘s current growth projections, which remain – in our view – too optimistic given the recent slowdown in economic momentum,” Deutsche said, predicting “a very different second-half story from the last 4-5 months”.