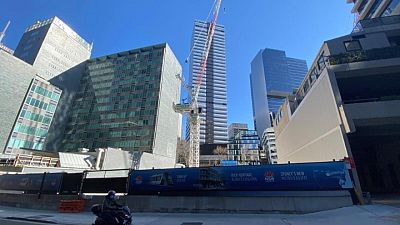 SYDNEY – A measure of Australian business conditions worsened sharply for a second month in July as coronavirus lockdowns took a heavy toll on service industries and confidence in general.

Tuesday’s survey from National Australia Bank showed its index of business conditions sank 14 points to +11 in June, though that was still above the long term average thanks to record high results ahead of a lockdowns.

The survey’s measure of confidence dived 19 points to -8, led by New South Wales state where much of greater Sydney was shut for the entire month.

“The survey shows that the strength in the business sector seen in early-to-mid 2021 has faded on the back of fresh disruptions in the economy but it has not yet deteriorated to the lows seen in early 2020,” said NAB chief economist Alan Oster.

“With the survey showing a very strong momentum in the lead up to the recent lockdowns, the hope is that once restrictions are eased, the economy will rebound relatively quickly.”

The Reserve Bank of Australia (RBA) last week also argued that the economy could recover quickly once the lockdowns were over and forecast strong growth for next year.

However, such an easing still seems weeks away in Sydney as governments struggle to boost vaccination levels.

A separate survey of consumers from ANZ showed the damage was deepening with sentiment down 3.1% last week, taking the index below 100 where pessimists outnumber optimists.

Service sectors have been particularly hard hit with strict travel restrictions, restaurants banned from dine-in meals and everything from gyms to hairdressers shut.

The extent of the hit was shown in the NAB survey measure of sales which fell a steep 20 points to +12 in July, while profitability lost 19 points to +6. The employment index fell 8 points to +10, though that is still a solid result historically.

Capacity utilisation dipped back sharply to 81.2%, while forward orders shed 21 points to -6.

The NAB survey was conducted from July 20-30.