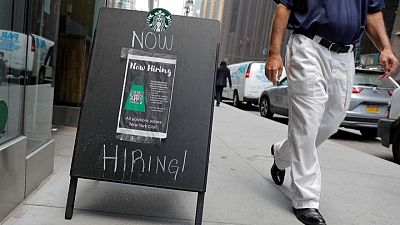 WASHINGTON – U.S. job growth likely remained robust in July amid shifts in seasonal employment at schools caused by the pandemic, which could mask some softening in underlying labour market conditions as the boost from fiscal stimulus and the economy’s reopening fades.

The Labor Department’s closely watched employment report on Friday could show nonfarm payrolls surging by at least 1 million last month because of the so-called seasonal adjustment factors, which are also seen inflating employment at auto assembly plants and in the leisure and hospitality sector.

Prior to the COVID-19 pandemic, education employment normally declined by about 1 million jobs in July as schools closed, while temporary plant shutdowns for summer retooling weighed on automobile payrolls. But this year many students are in summer school catching up after disruptions caused by the coronavirus.

Chip shortages have forced automakers to make changes to their normal production schedules. This could have impacted the timing of the temporary re-tooling shutdowns, which could throw off the model that the government uses to strip out seasonal fluctuations from the payrolls data. The seasonal factors are also expected to have boosted leisure and hospitality jobs.

“The seasonal adjustment factors are extremely favourable,” said Ryan Sweet, a senior economist at Moody’s Analytics in West Chester, Pennsylvania. “The job market has lost some momentum, reflecting the fading effects from the reopening, along with less impulse from fiscal stimulus.”

According to a Reuters survey of economists, nonfarm payrolls likely increased by 870,000 jobs last month after rising 850,000 in June. That would leave employment 5.9 million jobs below its peak in February 2020. Estimates ranged from as low as 350,000 to as high as 1.6 million, underscoring the uncertainty surrounding July’s employment report.

The department’s Bureau of Labor Statistics (BLS), which compiles the employment report, flagged the distortions to the normal seasonal layoff patterns with June’s release saying “the variations make it more challenging to discern the current employment trends in these industries.”

Though the labour market data has remained positive there are signs the pace of job growth has slowed relative to June. The ADP employment report on Wednesday showed the smallest private payrolls gain in five months in July. Data from Homebase, a payroll scheduling and tracking company, showed its employees working index rose moderately in July from June.

But Institute for Supply Management surveys showed a rebound in manufacturing and services industries employment last month. The Conference Board’s labour market differential, derived from data on consumers’ views on whether jobs are plentiful or hard to get, in July hit its highest level since 2000.

The economy fully recovered in the second quarter the sharp loss in output suffered during the very brief pandemic recession. The unemployment rate is forecast falling to 5.7% from 5.9% in June.

“The economy can still be growing at a healthy pace, even if we don’t see the expected acceleration,” said Brad McMillan, chief investment officer at Commonwealth Financial Network in Waltham, Massachusetts. “If we drop back below about 300,000, that would be a concern, showing that the medical issues and labour shortages really could be slowing the recovery.”

COVID-19 infections are surging across the country, driven by the Delta variant of the coronavirus. While major disruptions to economic activity are not expected, with nearly half of the population fully vaccinated, spiralling cases could keep workers at home and hamper hiring.

A shortage of workers has left employers unable to fill a record 9.2 million job openings, forcing them to raise wages. Average hourly earnings are forecast to have increased 0.3% in July, which would lift the annual increase in wages to 3.8% from 3.6% in June.

Lack of affordable child care and fears of contracting the coronavirus have been blamed for keeping workers, mostly women, at home. There have also been pandemic-related retirements as well as career changes.

Republicans and business groups have blamed enhanced unemployment benefits, including a $300 weekly check from the federal government, for the labour crunch. While more than 20 states led by Republican governors have ended these federal benefits before their Sept. 6 expiration, there has been little evidence that the terminations boosted hiring.

The worker shortage is expected to ease in the fall when schools reopen for in-person learning, but some economists are less optimistic, arguing that the economy was creating many low- skilled jobs and there were not enough people to take them.