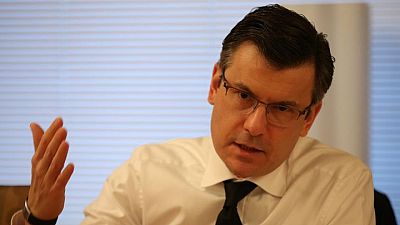 – UBS Global Wealth Management is betting on a reflation trade in the United States and globally linked to economic reopening as the world emerges from the COVID-19 Delta variant, Mark Haefele, chief investment officer at the world’s largest wealth manager, said.

“Not all of the inflation is going to go back to deflationary levels,” Haefele told the Reuters Global Markets Forum on Thursday, adding that he was bullish on equities, specifically the energy and financials sectors, along with Japan.

Valuations in emerging markets are attractive from a longer-term perspective, he said, as in the near-term there is uncertainty after China’s recent regulatory crackdown and a relatively slower COVID-19 vaccination roll-out.

Haefele, whose firm manages $3.2 trillion in assets, said he didn’t think there was a bubble in the equity markets, and expected the S&P 500 moving “modestly higher” from current levels, supported by strong earnings and as long as the U.S. Federal Reserve continued providing monetary support.

“I think the equity bubble, if it exists, is certainly not as big as the bond bubble,” he added.

Concerns about the Delta variant have set back the timeline for recovery by a little bit, he said, adding that the Fed won’t start on a path to normalisation until its employment targets are achieved.

“We’re not there yet … I think the Fed has left itself a lot more room to be lenient, because they’ve moved to this average inflation targeting (AIT),” Haefele said.

He did not see the markets reacting in a 2013-style taper tantrum as he expects the Fed will have flexibility due to its transition to AIT and a broader definition of employment.

“I think Chair Powell … wants to avoid that situation … The Fed will run hotter before they start talking about things like raising rates,” he said, which should cushion a blow around any taper tantrum.

Hefele expected the U.S. 10-year Treasury yields to move closer to 2% in the second half of 2021, and said he was “underweight” on high-grade bonds due to the risk around them.

“Historically, the rates are so low that we just don’t see them (high-grade bonds) able to perform the same role in portfolios in terms of providing that stability during crisis.”