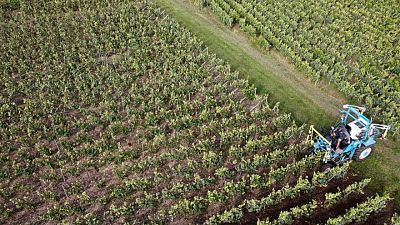 PARIS – France’s wine production could drop by as much as 30% this year to its lowest level in decades after vineyards were hit by spring frosts and summer downpours, its farm ministry said.

The weather toll on the harvest could bring further headaches for a French wine sector that has seen demand dented over the past year by the coronavirus pandemic and U.S. tariffs.

Champagne producers have warned their harvest potential has been cut by about half due to severe spring frosts followed by torrential summer rain that caused mildew fungus.

In its first outlook for national wine output, the French farm ministry on Friday projected 2021 production at between 32.6 million and 35.6 million hectolitres, 24-30% less than last year.

A hectolitre is the equivalent of 100 litres, or 133 standard wine bottles.

“Wine production in 2021 is forecast to be historically weak, below levels in 1991 and 2017 that were also affected by severe frost in spring,” the ministry said in a report.

Wine producers have previously projected that frosts may cut French production by a third.

With grapes about 10 days to two weeks behind last year’s growth pace, there was still time for yields to recover slightly, said Jerome Despey, a producer and head of the wine committee at farming agency FranceAgriMer.

Early harvesting was just starting in the far south of France compared with late July in 2020, he said.

Champagne producers say their longstanding practice of adjusting supply with stocks from previous seasons will prevent any spike in prices of the sparkling wine.

The impact on the wider wine market may depend on whether coronavirus variants lead to further restrictions on hospitality and tourism.

“Wine producers are facing major difficulties this year,” Despey said. “The lost production will never be made up for by market prices.”

High temperatures have led to the harvest starting a week early in the south, while in the north grape growth was running about 10 days late after heavy rain, Coldiretti said.