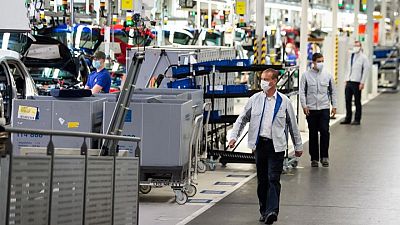 LONDON – Manufacturing activity across the euro zone continued to expand at a blistering pace in July as the reopening of the economy led to rocketing demand, but supply bottlenecks sent input costs soaring, a survey showed on Monday.

The upbeat survey follows official data on Friday which showed the bloc’s economy grew faster than expected in the second quarter, pulling out of a recession caused by the COVID-19 pandemic as curbs to stop the virus were eased.

Although factories largely remained open throughout pandemic lockdowns the loosening of restrictions designed to quell the spread of coronavirus infections has driven a flurry of demand.

IHS Markit’s final manufacturing Purchasing Managers’ Index (PMI) dipped to 62.8 in July from June’s record high of 63.4 but was above an initial 62.6 “flash” estimate.

An index measuring output, which feeds into a composite PMI due on Wednesday and seen as a good guide to economic health, fell from June’s 62.6 to 61.1. Anything above 50 indicates growth.

“The fact that growth of euro zone manufacturing cooled slightly in July after a record-breaking expansion during the second quarter should not itself be a major cause for concern,” said Chris Williamson, chief business economist at IHS Markit.

“But the July survey also brought further signs that manufacturers and their suppliers are struggling to raise production fast enough to meet demand, driving prices ever higher.”

Widespread shortages of materials and poor transport availability made it a seller’s market and pushed the input prices index up to 89.2 from 88.5, its highest reading since the survey began in June 1997. Prices charged for finished goods also increased at a record rate.

Despite rising prices, demand remained very strong and to try and meet that surge factories increased headcount at the fastest pace in the survey’s history.

But the shortage of raw materials manufacturers need meant they were unable to complete orders – despite depleting stocks of purchases and finished goods.

“Capacity constraint indicators continue to flash red. Input shortages worsened again in July at a near record rate and July saw another near-record rise in backlogs of work,” Williamson said.