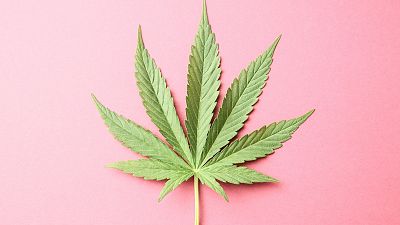 Cannabis oil, or CBD, is proving popular with Olympians but marijuana is proving controversial.   -   Copyright  Canva
By Pascale Davies  •  Updated: 02/08/2021

For the first time in the history of the Olympics, cannabidiol (CBD) has been allowed for use by elite athletes. But the substance, which has grown popular in recent years, has exposed hypocrisy and attracted criticism over its use in elite sport.

US footballer and Olympian Megan Rapinoe, who says she uses CBD to boost her performance, has been criticised for promoting her sister’s CBD company in a forbes.com article.

Meanwhile, Black sprinter Sha’Carri Richardson was suspended from the Tokyo 2020 Olympic Games after testing positive for marijuana in July.

The controversy over the discrepancy in how cannabis and its other forms like CBD are viewed has caused people to allege hypocrisy and racism by the World Anti-Doping Agency (WADA), the Olympic Games’ anti-doping agency.

The cannabis (marijuana) plant produces the cannabinoid compound or synthesizes it as a chemical known as a synthetic cannabinoid.

I’m sure athletes are being penalised unfairly because it's detectable at a time when they (THCs) have no effect on them.

There are over 140 cannabinoids in the plant. The most known one is the delta-9-tetrahydrocannabinol, or THC, which is the main psychoactive compound and alters the mind or behaviour.

But CBD is not the same as THC; CBD can have a similar effect for pain relief without getting you high, unlike THC.

Is CBD the future for athletes?

"There’s a lot of solid science behind CBD for its medical properties," Mike Barnes, a professor of neurology and chair of the Medical Cannabis Clinicians Society, told Euronews Next.

He said CBD is calming and can help general anxiety, which can be useful for athletes.

"There's stress in sports participation, so reducing anxiety can be very helpful both for them and of course for the general public," he said.

Another way CBD can help athletes is that it can help with sleep, which can be an issue for sports people, particularly those who have to travel to different time zones for events.

CBD can also help athletes with pain management. Barnes emphasises it cannot remedy severe pain but can be useful in easing the delayed onset of muscle stiffness after sport or just the general aches and pains that come with being an athlete.

These three particular ways CBD can help athletes can also be beneficial to the general public, he said.

There are many ways to take it, one of the most popular for athletes being an oil form by putting a few drops under the tongue and swallowing, or it can even be eaten in gummies.

But even though some athletes have been using CBD in their training regime for this year’s Olympics, they have not been able to use it while in Tokyo due to the country’s strict anti-cannabis laws.

Why are THC and cannabis banned but not CBD?

In 2017, WADA removed CBD but not other cannabinoids from its list of prohibited substances. The rule change did not take effect until January 1, 2018, which gave athletes little time to start incorporating CBD into their regimes for the Winter Olympics in Pyeongchang the same year.

Barnes said to an extent this can be seen as hypocritical.

"It's arguable whether THC is performance-enhancing. Most people would say no. Some would say yes," he said.

"Being devil's advocate, you might say that some forms, not all forms of cannabis, but some might make you a little bit more creative, a little more focussed… it could effectively give you an advantage over someone who didn't use it, possibly".

CBD’s now caught on and I think it's here to stay. And why it's being so popular is that people are discovering that it works.

Another possible reason for the THC ban, Barnes points out, is that it stays in the system for five to seven days, despite the effects wearing off in a matter of hours.

This is because THC is absorbed into the fat stores and comes out of the body over several days so it can show up in urine samples or blood tests.

"I’m sure athletes are being penalised unfairly because it's detectable at a time when they (THCs) have no effect on them," Barnes added.

Over recent years, the CBD market has exploded, especially in Europe.

By 2025, the global CBD industry is projected to accelerate to $23.6 billion (€20 billion), according to Grand View Analysis.

By 2023, Europe’s CBD market is set to rise by 400 per cent, according to Brightfield Group, a leading consumer insights and market intelligence firm for the legal CBD and cannabis industries.

This is largely due to CBD becoming more socially accepted and is being touted for its medical and well-being properties.

Another reason is that CBD-infused goods are being widely used in industries such as beauty, cosmetics, pharmaceuticals and personal care, among others.

CBD is legal in almost every European country but the THC level must be below 0.2 per cent if not it is classified as a narcotic.

In January 2021, the European Commission changed its preliminary assessment on CBD oil and stated the compound is not a narcotic and "can be qualified as food". It also said CBD products should be able to move between member states.

Barnes said he believed it is because world bodies such as WADA and the World Health Organization (WHO) saying CBD is safe that more countries will eventually make the compound legal.

The WHO said in a 2020 report that CBD "is generally well tolerated with a good safety profile" and that it exhibits no effects indicative of any abuse or dependence potential.

"CBD’s now caught on and I think it's here to stay. And why it's being so popular is that people are discovering that it works," said Barnes.

How is technology developing the industry?

Technology is playing a massive role in the way CBD is produced, extracted, and delivered.

Drones and Internet of Things (IoT) technologies are changing smart farming technology so that it can increase the quality and quantity of the plant. It is allowing farmers to scan the soil, have a better knowledge of pesticide levels, give them better access to GPS and improve data management.

There is an increase in the commercialisation of cold press extraction, where the hemp plant is pushed through a press and is said to be the most natural method.

There has also been growth in synthetically produced CBD. Synthetic CBD is created from base materials using chemistry and is not extracted from the cannabis plant.

Barnes said there will likely be an increase in synthetic CBD but he believes there is much more benefit to extracting compounds from the whole cannabis plant and taking out the THC.

As for ways of consuming CBD, this is also changing. Rather than vaping it or using it in its oil or tablet form, sprays, patches, and suppositories are also making CBD more accessible for more people.

"So, technology has a big role to play in developing the CBD market".