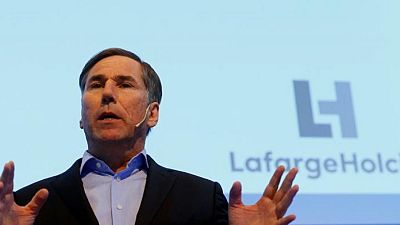 ZURICH – Cement maker Holcim increased its guidance for full-year operating profit on Friday, saying it was looking to the impact of post-pandemic economic stimulus measures to maintain upward momentum in the global building sector.

The Swiss-based company, which recently changed its name back from LafargeHolcim, continued its bullish stance under Chief Executive Jan Jenisch after posting big increases in sales and profit during the first six months of 2021.

Higher volumes boosted profits as building projects resumed, with government stimulus policies expected to support further growth in the second half of the year.

“When the pandemic unfortunately started, we announced a fitness programme … to focus on cash flow and also to really emerge from the crisis much fitter,” Jenisch told journalists.

“We have used the last year and also the first half of this year to improve the costs, and also focus on good pricing,” Jenisch said. “The company has never been as fit as it is today.”

During the first half its recurring operating profit margin rose to 15.8% from 11.2% a year earlier. Jenisch said such an improvement was not a one off, but was sustainable.

The company expects its growth momentum to continue in all regions during the rest of 2021, and increased its full-year guidance to see recurring EBIT rising by at least 18%, up from its previous view for a 10% increase on a like-for-like basis.

Further acquisitions will follow this year after Holcim already made seven deals in the first half of the year.

It will also press on with potential divestments after agreeing to sell its businesses in Malawi, Zambia and the Indian Ocean region.

“We have an ongoing portfolio movement … and we will shave a little bit in other regions,” Jenisch said. [Z8N2M702F]