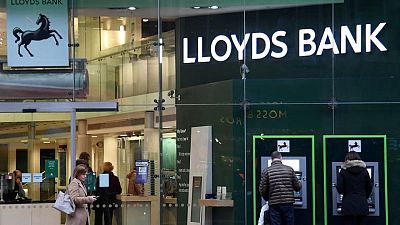 LONDON – Lloyds Banking Group swung to a first-half profit on Thursday and announced an interim dividend, boosted by a house-buying frenzy and improved economic outlook in Britain.

The positive update from the bellwether mortgage lender came after rival Barclays also posted upbeat earnings on Wednesday, and showed how banks’ profits are recovering as fears of pandemic-related bad loans ebb.

Lloyds posted pretax profit of 3.9 billion pounds ($5.4 billion) for the six months to June, ahead of the 3.1 billion pound average of analyst forecasts compiled by the bank.

The bank had posted a first-half loss of 602 million pounds the previous year, after setting aside billions to cover potential bad loans linked to the COVID-19 pandemic.

Lloyds also announced a 0.67 pence interim dividend, a day after Barclays unveiled more than $1 billion worth of shareholder payouts.

Lloyds shares rose 1.5% in early trading on Thursday, against a 0.3% gain in the benchmark FTSE index.

The bank confirmed the acquisition of digital savings and retirement group Embark, adding 410,000 customers and 35 billion pounds of assets.

Like rivals, Lloyds is looking to expand in wealth management on the basis of a pandemic-driven savings boom, to make up for squeezed margins from record low Bank of England rates.

“Lloyds is banking on headlines of its biggest acquisition since going private in 2017 to glaze over a 33% decline in net interest income,” said Gemma Boothroyd, analyst at investment platform Freetrade.

Bank profits in Britain are under pressure from low returns on lending, as well as changing customer behaviour brought on by the pandemic.

Lloyds said lending increased by 7.5 billion pounds in the first half as the economy began to open up during the period, but was again outstripped by growth in deposits – up 23.7 billion pounds as customers continued to build up savings.

Lloyds released 656 million pounds of its bad loan provisions, after upgrading its economic forecasts following a rapid rollout of COVID-19 vaccines in Britain.

The bank said it had 1.4 billion pounds extra set aside for potential defaults compared to before the pandemic.

“[We have] some allowance for uncertainties around the vaccine rollout and vaccine mutation,” interim CEO and finance director William Chalmers told reporters. “Overall our economic outlook is certainly an upgrade.”

But its results were weighed down by 425 million pounds of “remediation charges”, including compensation for historic fraud at its HBOS Reading branch and a previously disclosed fine for misleading insurance customers.

The bank also said costs would be 100 million pounds higher this year than it previously guided, as it increases bonuses for staff after all-but cutting them last year.

Lloyds is in the midst of a shake-up of its top team after long-standing boss Antonio Horta-Osorio left in April to become chairman of Credit Suisse.

Chalmers is running the bank before HSBC veteran Charlie Nunn takes the helm next month. Nunn and chairman Robin Budenberg – who stepped into his role in January – are expected to devise a refreshed strategy for the bank.