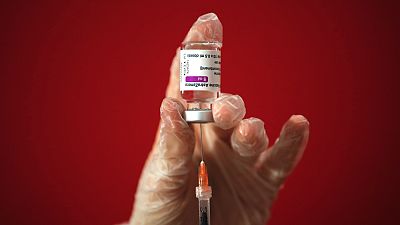 Nearly a dozen countries including Germany, France and Italy temporarily suspended their use of the AstraZeneca jab after reports some patients developed blood clots   -   Copyright  Alessandra Tarantino / AP Photo
By Tom Bateman  •  Updated: 17/08/2021

Patients developed blood clotting conditions after receiving the AstraZeneca COVID-19 vaccine at a "similar" rate to those who received the Pfizer/BioNTech jab, say researchers.

A team of researchers from Spain, the UK and the Netherlands compared data from over 1.3 million people vaccinated against COVID in Catalonia, looking for evidence of blood clotting conditions that developed after they received their vaccinations.

"In this study including 1,372,213 people vaccinated against SARS-CoV-2, similar safety profiles were seen for both vaccines," the researchers wrote in their pre-print paper, which has not been peer-reviewed.

Crucially, the study authors found that people who had been infected with COVID-19 developed blood clots at a far higher rate than those who had received either of the AstraZeneca or Pfizer/BioNTech vaccines.

The early stage findings come after a challenging period for the AstraZeneca vaccine. In April The European Medicines Agency (EMA) said there was a "possible link" between the vaccine and "very rare cases of unusual blood clots with low blood platelets". Following the discovery, many countries around the world imposed restrictions on its use.

What did the researchers find?

The team, led by researchers from Barcelona's IDIAP Jordi Gol institute, found that rates of venous thromboembolism (VTE) – a combination of deep vein thrombosis and pulmonary embolism – were roughly 1.3 times higher in people who had received either the AstraZeneca or Pfizer/BioNTech vaccines than in those who had not been vaccinated.

Perhaps more shockingly, the EMA-funded study found that rates of VTE were eight times higher in people who had been infected with COVID-19.

Deep vein thrombosis is a condition in which blood clots form in the deep veins of the body, typically in the arms, legs or groin. A pulmonary embolism (PE) occurs when a blood clot formed via DVT breaks free and is transported to the lungs by the circulatory system, where it blocks some or all of the blood supply. PE can often prove fatal.

While they would normally expect to see 62 cases of VTE, the 222,710-strong cohort of COVID-19 positive patients in the study included 499 cases, a roughly eight-fold increase over normal levels.

The researchers also found that rates of arterial blood clotting events for recipients of both vaccines were similar to, or lower than would be expected to occur in a similar, unvaccinated group.

Commenting on the study, the researchers noted that a difference in size and demographic makeup of the groups of patients receiving each vaccine introduced a degree of uncertainty into the results.

"In general, rates of thrombosis after vaccination with a first dose of [AstraZeneca] were similar to those seen after a first dose of [Pfizer/BioNTech], although with fewer study participants having received this vaccine, there was greater uncertainty around estimates," they said.

A separate paper published in the Lancet on Wednesday by AstraZeneca researchers found that rates of a rare blood clotting disorder in people who had received both doses of the company's vaccine were comparable to those in healthy, unvaccinated people.

According to the AstraZeneca paper, the rate of thrombosis with thrombocytopenia syndrome – blood clots with low blood platelets – was 2.3 per million second-dose recipients.

However, the study also reproduced the finding that the rate of blood clots was higher in the two weeks following a first dose. "It was 8.1 per million vaccinees after the first dose," the company said.

The study combined data from 49.23 million people in the EU and UK who had received one dose of the AZ vaccine and 5.62 million who'd had both jabs as of late April 2021.

*Update July 29: This article previously stated that the paper by IDIAP Jordi Gol institute researchers was due to be published in The Lancet. This was an error. The pre-print paper has been submitted to the Lancet family of journals, but is not currently a Lancet publication or necessarily under review by a Lancet journal.

Could COVID breathalyser tests be the end of invasive nose swabs?