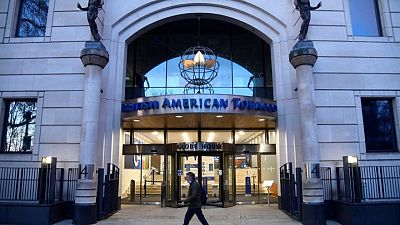 The FTSE-listed company said 2.6 million more customers took up its cigarette alternative products such as Vuse e-cigarettes and Velo oral nicotine pouches in the first half bringing its total user base of non-combustible products to 16.1 million, a record.

In comparison, the company had added 3 million customers for the whole of 2020.

E-cigarette revenue jumped 59% in the six months ended June 30, while it rose 63% and 38% for its Velo and glo tobacco heating products, respectively.

The maker of Lucky Strike and Dunhill cigarettes kept its full-year forecast for overall sales growth of more than 5% sales and mid-single digit adjusted EPS growth in constant currency terms.

Its shares were flat in early trading.

Executives told reporters the group had invested more than 300 million pounds ($416.46 million) in the business which sells cigarette alternatives, and had been “marketing hard.”

Strong promotions in the United States around Velo and around glo Hyper in Europe and North Africa and Japan, saw it gain market share and customers in those markets, they said.

The company’s results come a day after the World Health Organization warned https://www.reuters.com/business/healthcare-pharmaceuticals/young-lured-tobacco-addiction-via-e-cigarettes-who-2021-07-27 that electronic cigarettes and similar devices could lead to tobacco addiction and “must be better regulated.”

Anna Mitchell, BAT‘s head of communications and sustainability, said the company was “watching regulations as they emerge around the world.”

“There is a lot of research behind reduced risk products … It’s important to look at the science and be guided by the science,” she said.

Overall, BAT‘s total adjusted revenue rose 8.1% to 12.18 billion pounds ($16.90 billion) in the first half, ahead of the 12.02 billion pounds analysts had expected, according to a company-supplied estimate.

BAT said cigarette sales jumped 5.8% in the first half, helped by higher prices and a resurgence in demand in emerging markets. It also revised its annual outlook for the global cigarette industry, with volumes now expected to drop about 1.5% compared with a 3% decline it anticipated earlier.