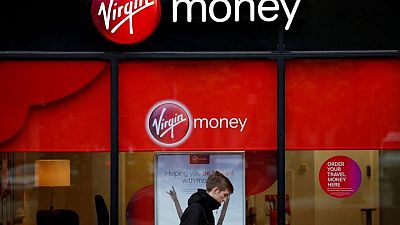 – British bank Virgin Money raised its margin forecast on Tuesday after reporting an increase in home and consumer lending in the third quarter as COVID-19 restrictions eased.

The company also released 19 million pounds it had set aside for potential loan impairments during the health crisis, and said it might lower its remaining 678 million pounds ($934.83 million) of provisions further if the economic backdrop continued to improve.

“While risks remain from the increase in COVID case numbers driven by the new variants and the impact of the removal of government support schemes later in the year, the strengthening backdrop gives scope for greater optimism about the pace of the recovery,” Virgin Money said.

The UK’s sixth largest bank said overall customer loans climbed to 72.5 billion pounds in the three months to June 30, up 0.4% on the previous year.

Mortgage loans were up 0.7% to 58.7 billion pounds, while personal loans, including credit cards, rose 2.5% to 5.2 billion pounds, together making up for a drop in business loans as government pandemic lending schemes wound down.

“A strong update across all areas,” banking analysts at Citi said in a note. “The provision reversals, better NIM (net interest margin) outlook and stronger cards growth also bode well for the large-cap domestic peers too.”

The company, whose margins have been squeezed by record low central bank interest rates, said it now expects net interest margin for the year to be modestly above its previous guidance of 160 basis points.

Virgin Money’s NIM – a key measure of a bank’s profitability – improved to 168 bps in the third quarter compared to 160 bps in the second, thanks to lower cost of funds due to improvements in deposit mix and repricing.

Virgin Money’s quarterly numbers come ahead of a flurry of updates from Britain’s biggest banks, with Barclays, Lloyds and NatWest all due to report half-year results this week.