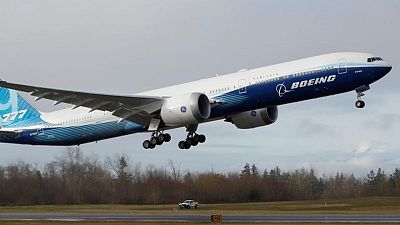 – Commercial jets delivered by Boeing Co last year will account on average for emissions equivalent to 1 million tonnes of carbon dioxide each over their 20-year-plus lifespans, a new report from the planemaker shows.

Boeing is the latest company to report so-called Scope 3 emissions that result when customers use their products, amid pressure from investors and climate activists for data on how companies are performing on limiting their environmental impact.

The report sheds further light on the task facing global aviation as it faces calls by environmental groups for curbs to air travel and growing political pressure to cut emissions, after Europe’s Airbus issued similar data in February.

Together, the world’s two largest planemakers in 2020 delivered jets estimated to be responsible for total emissions equivalent to 600 million tonnes of CO2 over their lifetimes, a figure dampened by lower deliveries during the pandemic.

Aviation produces up to 3% of man-made CO2 emissions and 12% of CO2 from transport, the industry says. It has pledged to reduce net carbon emissions to 50% of 2005 levels by 2050, but is moving towards a tougher target of eliminating net emissions.

Calhoun reiterated that its jets would fly on 100% sustainable aviation fuels by 2030. Jet engines are currently certified to run on up to 50% of the fuel.

In the report, Boeing said commercial airplanes it delivered in 2020 would be responsible for emissions equivalent to 158 million tonnes of CO2, or MtCO2e, over their lifespan.

That consists of 136 million tonnes of emissions directly linked to their operation by airlines, and 22 million tonnes related to the production by energy companies of the fuel used in flight.

Boeing has said it delivered 157 airplanes in 2020, suggesting each jet will on average generate emissions equating to 866,000 tonnes of CO2 over its lifespan, or 1 million tonnes including indirect emissions linked to fuel production.

By contrast, Airbus in February said it had delivered 566 jets in 2020 with estimated lifetime emissions of 440 million tonnes, including 80 million for fuel production.

That equates to lower emissions per airplane compared with Boeing’s data, or 636,000 tonnes through direct operations, and 777,000 tonnes including related oil-industry emissions.

Experts said comparisons are blurred by different assumptions on the average length of a jet’s service.

Airbus assumed an average 22-year lifespan for its jets. A Boeing spokesman said it assumed 22.8 years for single-aisle aircraft, 21.5 years for twin-aisles and 29.6 years for freighters. Based on Boeing’s 2020 delivery data by type, that suggests a weighted average of 24.8 years, Reuters calculates.

Boeing also dominates the market for freighters, which fly longer and had an unusually high share of 2020 deliveries.

In 2018, the last year of undisturbed data before Boeing was hit by successive crises over the grounded 737 MAX passenger plane and COVID-19, its emissions per airplane appeared more in line with the trends reported by its rival.

For the 806 jets delivered that year, Boeing expects direct lifetime emissions of 560 millions tonnes, or 652 million including fuel production, a spokesperson said.

But environmentalist groups insist that flying itself needs to be limited to have a meaningful impact on climate change.

“The data confirms that Boeing’s aircraft come with a high environmental price tag,” said Dan Rutherford, aviation director at the International Council on Clean Transportation, an environmental research group based in Washington.

Both Boeing and Airbus say their estimates do not include the impact of an expected increase in the use of sustainable aviation fuels, which would cut emissions further. The European Union this month proposed new targets for the fuel.