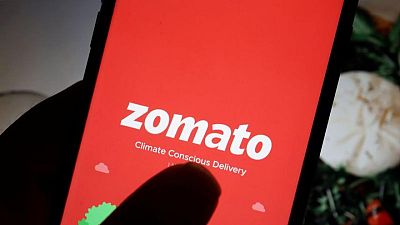 BENGALURU -Indian food delivery firm Zomato Ltd surged 65.8% in its stock market debut on Friday, giving the startup a valuation of 988.49 billion rupees ($13.28 billion) and setting the stage for other domestic startups that are waiting in the wings with listing plans of their own.

The 13-year-old company belongs to the first generation of big home grown startups in the country to go public successfully on Indian bourses.

“Zomato is definitely a big event for the startup community, and for the other technology companies that are waiting to come to the capital market,” said Siddhartha Khemka, head of retail research, broking & distribution at Motilal Oswal Financial Services.

Like U.S.-based DoorDash Inc, Zomato is mainly a food delivery app, having partnered with about 390,000 restaurants and cafes in 525 Indian cities. It also allows customers to book tables for dining-in, write food reviews and upload photos.

Zomato’s opening price of 116 rupees, a 53% premium to the offer price of 76 rupees, was the second best performer among Indian listings of at least $500 million, after Power Grid Corp, which gained 73% at open on its first trading day in 2007.

Like most other startups, the Gurugram-based company is yet to make a profit. It has said it will use the money raised from its listing to better its delivery infrastructure and acquire more users. The company competes with SoftBank-backed Swiggy and Amazon.com’s food delivery service.

Thirty-eight year old founder Deepinder Goyal, an engineer from the esteemed Indian Institute of Technology in Delhi, said the “tremendous response to our IPO gives us the confidence that the world is full of investors who appreciate the magnitude of investments we are making, and take a long term view of our business.”

Analysts agreed, hailing the success of the IPO as a testament to changing appetite by investors and an ability to support risk-taking.

“The market is showing some maturity by trying to understand and value such companies which are non-traditional, both in terms of the business that they do and in terms of the financials they offer,” Motilal Oswal’s Khemka said.

China’s Ant Group holds a 16.53% stake in Zomato, while its top shareholder with an 18.55% stake is online technology company Info Edge (India).

Zomato’s listing comes after other internet-based delivery startups such as DoorDash and Deliveroo. While DoorDash had a successful debut late last year, Deliveroo flopped in March.

“Growth is key here. Zomato might not be profitable but it is growing exponentially and is enviably positioned to keep that momentum.”