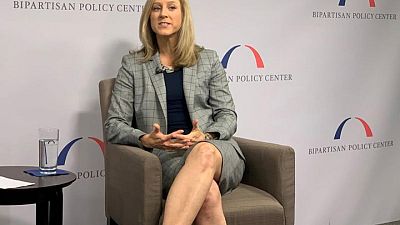 Kathy Kraninger is the latest former Trump administration official to land in the booming digital currency industry as it beefs up on legal expertise and Washington connections amid increasing regulatory scrutiny.

Kraninger will lead and build out Solidus Labs’ regulatory team, spending most of her time working with regulators, U.S. lawmakers and traditional institutions to explain how digital markets can be effectively policed, she said in an interview.

Her career in government, including helping to set up the Department of Homeland Security and leading the CFPB from 2018 to 2021, positions her to contribute to a growing debate in Washington over how to regulate cryptocurrencies, she said.

The ability to monitor cryptocurrencies has become a major worry for regulators as the ballooning market, which reached a record $2 trillion capitalization in April, has experienced wild volatility.

In June, the Securities and Exchange Commission (SEC) again delayed approving a bitcoin exchange traded fund and sought feedback on the risks of market manipulation.

Crypto and fintech companies have been snapping up former Trump regulators. Former bank regulator Brian Brooks was appointed Binance’s U.S. CEO in May, while Chris Giancarlo, former chair of the U.S. derivatives regulator, is an investor in Solidus and founded the Digital Dollar Project which advocates for U.S. policymakers to develop a digital dollar.