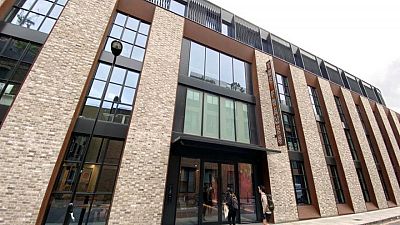 – UK office space provider Workspace said on Thursday its occupancy in London had started to pick up from pandemic lows, although rents were still under pressure as businesses were in no rush bring all their employees back.

The company, which caters mostly to small and medium-sized enterprises and entrepreneurs and last month reported its first annual loss in 12 years, said that two-thirds of the space it has rented out was not being used. The average rent per square foot in the April-June quarter declined 2.4% from the January-March quarter, but occupancy inched up 1.1 percentage points to 82.7% on a like-for-like basis, it said.

In a further sign of improving demand, Workspace, whose 58 properties in London are modelled as flexible office spaces, said average monthly enquiries from potential customers had almost doubled to 947 in the April-June quarter compared to a year earlier.

Shares in the mid-cap company, which provides unfurnished spaces to a varied client base from architects to florists and craft beer brewers to app developers, were up 3% by 1100 GMT after losing more than a third of their value since the pandemic took hold.

The wider industry has been struggling as repeated lockdowns forced people to work from their homes, a shift that major companies including Amazon and Standard Chartered are adopting for the long term.

Workspace boss Graham Clemett acknowledged that some level of uncertainty will continue in the near term, but said there were strong signs that London’s businesses were returning to work. England lifted all its pandemic restrictions earlier this week.

Jefferies analysts said while disruption could continue from the fast-spreading Delta variant of the coronavirus, Workspace’s occupational signs looked encouraging.

“The prospect of more passing trade and higher overall footfall is clearly giving small businesses the confidence to dip their toe into trading once more,” Hargreaves’ Susannah Streeter said.

While short-term flexible leases and a heavy exposure to small companies battered Workspace’s performance last year, the company could benefit from businesses seeking out flexible spaces as they are hesitant to commit to long-term leases.

“Younger employees with little prospect of a regular desk in the office, may opt for a seat in one of Workspace’s shared offices, instead of working from the kitchen table for the foreseeable future,” Streeter said.