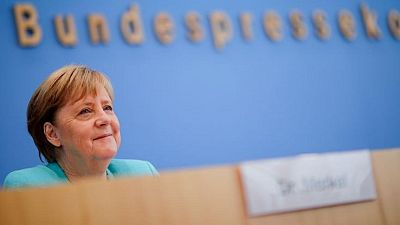 By Kirsti Knolle and Pavel Polityuk

BERLIN/KYIV – German Chancellor Angela Merkel on Thursday defended a deal with the United States that allows the Nord Stream 2 gas pipeline to proceed as a pragmatic compromise, but Ukraine said the agreement was too weak to ensure Russia behaves the way Kyiv and the West want.

Ukraine has long opposed the nearly completed $11 billion project which will take Russian gas to Germany because it will give Moscow the theoretical option to stop routing gas via Ukraine, a move that would deprive Kyiv of billions of dollars in lucrative transit fees and, it says, imperil its security.

A current transit deal expires in 2024. Alexei Miller, Chief Executive with Gazprom, reiterated on Thursday that Russia was ready to extend the deal if the commercial terms are right.

Despite long-standing U.S. objections to the project, President Joe Biden’s administration concluded that it was too advanced to stop. Germany, which strongly backs the pipeline, and the United States announced on Wednesday what amounted to a truce over the pipeline.

Under its terms, Germany pledged to respond to any attempt by Russia to use energy as a weapon against Ukraine and other Central and Eastern European countries. The deal also included a commitment to help Ukraine continue to receive transit fees once Nord Stream 2, now 98% complete, becomes operational.

Merkel said on Thursday she had secured Russian assurances that Moscow would not use the pipeline as a weapon but that Berlin was ready to react with sanctions if it did so.

“After all, we are not without any tools to do something,” said Merkel, adding she hoped sanctions against Moscow would not be needed.

Kyiv had wanted the project stopped altogether and had cited Russia’s 2014 annexation of the Ukrainian region of Crimea and its backing for pro-Russian separatists in a conflict in eastern Ukraine as grounds for not trusting Moscow.

“There is a fundamental problem … it is still unclear to us whether Russia is ready to fulfil its obligations and its part properly when it comes to the energy security of Ukraine and the preservation of Ukraine’s role as a transit state,” Kuleba said.

Ukraine has started official consultations with the European Union and Germany about Nord Stream 2.

“We are not listened to, we are not looking for solutions at the same table with the U.S., the EU and Germany as we should. We are not even part of the process,” he said.

“We make a lot of emotional statements that have the same force as last year’s snow.”

The Kremlin gave a mixed welcome to the U.S.-German deal, saying it disagreed with some of the language used about Russia and that Moscow had never used energy as a geopolitical weapon.

“Russia has always been and remains a responsible guarantor of energy security on the European continent, or I would even say on a wider, global scale,” Kremlin spokesman Dmitry Peskov told reporters.

Nord Stream 2 should be finished in late August and enter service this year, the company running the project said earlier this month.