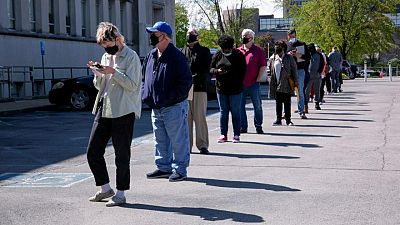 WASHINGTON – The number of Americans filing new claims for unemployment benefits unexpectedly rose last week, but that likely does not suggest a material shift in labor market conditions, with another month of strong job growth expected in July.

Initial claims for state unemployment benefits increased 51,000 to a seasonally adjusted 419,000 for the week ended July 17, the Labor Department said on Thursday. Economists polled by Reuters had forecast 350,000 applications for the latest week.

The rise in claims likely reflects difficulties smoothing the data for seasonal fluctuations following the upheaval from the COVID-19 pandemic. In normal years, layoffs are usually expected to decline in the second half of July. Before the pandemic, summer factory closures were the norm in early July, especially in the automobile industry.

“The seasonal adjustment factors attempt to compensate for that,” said Lou Crandall, chief economist at Wrightson ICAP in Jersey City, New Jersey. “But it is unclear that the seasonal dynamics will follow the normal pattern.”

Claims have declined from a record 6.149 million in early April 2020, but they remain above the 200,000-250,000 range that is seen as consistent with healthy labor market conditions.

Though the Delta variant of the coronavirus is driving a surge in infections mostly among unvaccinated Americans, economists do not expect large-scale business shutdowns.

Still, the latest wave of infections poses a risk to the economy, which experienced a sharp two-month recession in 2020 due to the pandemic. The National Bureau of Economic Research’s business cycle dating committee declared on Monday that the recession, which started in February 2020, ended in April 2020.

“We can live with the current infection levels, nationally,” said Brad McMillan, chief investment officer at Commonwealth Financial Network in Waltham, Massachusetts. “The infections, this time, are unlikely to lead to economically damaging policy changes.”

Last week’s claims data covered the period during which the government surveyed business establishments for the nonfarm payrolls component of July’s employment report. The economy created 850,000 jobs in June after adding 583,000 in May. Employment is 6.8 million jobs below its peak in February 2020.

Data next week on the number of people continuing to receive benefits after an initial week of aid will offer more clues on how hiring fared in July. Claims data have been muddied by the federal government’s expansion of benefits to people who do not qualify for the regular state programs. People have to apply for state programs to determine eligibility for federal benefits.

The so-called continuing claims, which are reported with a one-week lag, have been falling since late June.

At least 20 states led by Republican governors have pulled out of federal government-funded unemployment programs, including a $300 weekly payment, which businesses claimed were encouraging unemployed Americans to stay at home.

There were a record 9.2 million job openings at the end of May. About 9.5 million people are officially unemployed.

Evidence is mixed on whether the early termination of federal benefits, which started on June 12 and will run through July 31, is encouraging job searches. The expanded benefits will lapse on Sept. 6 for the rest of the country.

“It will not likely be until the details of the July employment report are released that we will know if states ending benefits programs early had a notable increase in employment,” said Veronica Clark, an economist at Citigroup in New York.