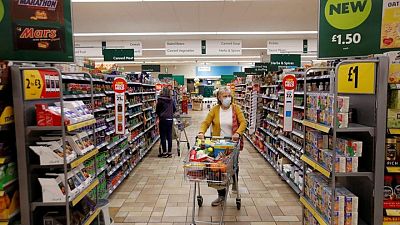 LONDON -Shareholders in British supermarket group Morrisons will vote next month on a 6.3 billion pound ($8.7 billion) agreed takeover offer from a consortium led by the SoftBank-owned Fortress Investment Group.

A scheme document outlining Fortress’ offer, published on Thursday, said a court meeting and a general meeting of shareholders would be held on Aug. 16 at Morrisons’ headquarters in Bradford, northern England, and online.

To go through, the offer needs the support of shareholders representing at least 75% in value of voting shareholders at the meeting.

The Fortress offer is worth 254 pence a share, made up of 252 pence in cash and a 2 pence a share special dividend.

Shares in Morrisons closed at 268 pence on Thursday.

The offer from Fortress, along with Canada Pension Plan Investment Board and Koch Real Estate Investments, exceeded a 5.52 billion pound unsolicited proposal from Clayton, Dubilier & Rice (CD&R), which Morrisons rejected in June.

CD&R could still make a higher offer. Analysts have speculated that Amazon, which has a partnership deal with Morrisons, could also enter the fray.

Britain’s Takeover Panel, which regulates corporate transactions, said on Thursday it had given CD&R until Aug. 9 to announce a firm intention to make an offer or walk away — a so-called “put-up or shut-up” order.

A third private equity suitor Apollo Global Management said on Tuesday it would not pursue a solo offer for Morrisons but could join the Fortress consortium.

Morrisons said it and Fortress were also in talks with the trustees of Morrisons’ pension schemes.

It said Fortress had confirmed it appreciated the importance of the schemes as key stakeholders and that it recognised the need to maintain support currently provided to them and that this required mitigation.

Talks are continuing with the trustees to agree mitigation and the trustees will issue their opinion on the Fortress offer in due course, Morrisons said.