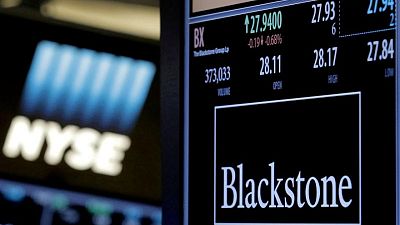 Shares of other publicly listed private equity firms also staged record rallies as they capitalized on frothy market valuations to cash out on assets for top dollar. Private equity firms that had previously been wary of a stock market debut, such as TPG and L Catterton, are now considering following suit, Reuters has reported.

Blackstone’s distributable earnings, which represents the cash used to pay dividends to shareholders, rose to $1.1 billion from $548 million a year earlier.

This translated into distributable earnings per share of 82 cents, surpassing the average analyst estimate of 78 cents, data compiled by Refinitiv showed.

Blackstone said its capital deployment reached a record $23.8 billion during the quarter. It also committed to investing an additional $28.5 billion in deals such as acquiring a majority stake in medical supplier Medline Industries Inc alongside Carlyle Group Inc and Hellman & Friedman.

Buoyant capital markets and rising company valuations allowed Blackstone to cash out a lot of its investments. Total asset sales reached $19.6 billion, including the $2.9 billion divestment of its portfolio of warehouse and logistics assets in Australia.

“We remain focused on our high-conviction thematic areas, such as sustainability, logistics, digital infrastructure, housing and the post-COVID travel recovery,” Blackstone President Jonathan Gray said during an earnings call with analysts.

The buyout firm said its private equity portfolio grew 13.8% in the second quarter, compared with a 8.2% rise in the benchmark S&P 500 stock index over the same period. Opportunistic and core real estate funds rose 9.4% and 5.7%, respectively.

Last week, Blackstone said it reached a $7.3 billion agreement with insurer American International Group Inc to buy a portfolio of rent-controlled apartments and a nearly 10% stake in a life and retirement unit that will be spun off from the insurance giant.

This will bring in an additional $50 billion in assets under management, pushing Blackstone’s total insurance assets to $150 billion, Gray said. Blackstone is also one of the largest U.S. property landlords.

Its total assets under management rose to $684 billion from $648.8 billion in the prior quarter. Unspent capital fell to $129.9 billion from $148.2 billion three months earlier owing to the pace of capital deployments.

Blackstone declared a quarterly dividend of 70 cents per share.