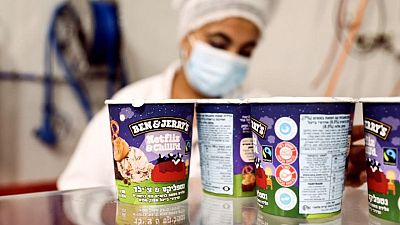 – Unilever’s chief executive on Thursday said the company was “fully committed” to Israel, days after coming under Israeli pressure over a decision by its subsidiary Ben & Jerry’s to end ice cream sales in the occupied Palestinian territories.

The Ben & Jerry’s ice cream brand took its decision after pressure from pro-Palestinian groups over its business in Israel and Jewish settlements in the West Bank, handled through a licensee partner since 1987.

Most countries consider Israeli settlements on Palestinian land to be illegal. Israel disputes this.

“ If there’s one message I want to underscore … it’s that Unilever remains fully committed to our business in Israel,” CEO Alan Jope told investors during an earnings call.

He said the group had invested 1 billion shekels ($306 million) in Israel over the past decade and was invested in its startup culture and social programmes.

Ben & Jerry’s, which has built a reputation as a supporter of social justice causes, such as the Black Lives Matter movement and LGBTQ+ rights campaigns, was acquired by Unilever in 2000 in a deal allowing it to operate with more autonomy than other subsidiaries, which Jope said it exercised in this case.

“This was a decision taken by Ben & Jerry’s and its independent board … and we always recognise the importance of that agreement,” he said.

Jope declined to discuss the potential sales impact and played down the tension between the brands, saying “there was a very healthy dialogue between Ben & Jerry’s and the rest of Unilever.”

“The majority of our brand purpose initiatives are very tightly linked to universal human truths and its the nature of what that brand (Ben & Jerry’s) does.”