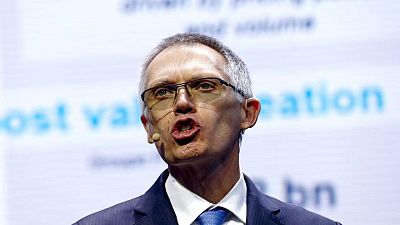 DETROIT -The global semiconductor chip shortage that has hit automakers around the world and constrained vehicle production will easily drag into next year, the chief executive of the world’s No. 4 automaker, Stellantis, said on Wednesday.

The comments by Carlos Tavares at an Automotive Press Association event in Detroit echoed those made by Daimler AG earlier in the day.

“The semiconductor crisis, from everything I see and I’m not sure I can see everything, is going to drag into ‘22 easy because I don’t see enough signs that additional production from the Asian sourcing points is going to come to the West in the near future,” Tavares said.

The global chip shortage comes as demand for cars has spiked during the global economy’s recovery from the coronavirus crisis, driving up prices of new and used vehicles.

Some carmakers have adapted to the chip shortage by dropping features from their models, while others have built vehicles without the necessary chips and then parked them until their assembly can be finished later.

Stellantis is making decisions around changing the diversity of chips it intends to use, he said, adding the visibility around chips is not great. It takes roughly 18 months to re-engineer a vehicle to use a different chip because of the sophistication of the technology involved, he said.

Tavares said Stellantis will continue to prioritize its highest profit models with the chips it is receiving, echoing an approach taken by rivals.

Earlier on Wednesday, Daimler said the chip shortage would dent car sales in the second half of 2021 and extend into 2022. However, Daimler Chief Financial Officer Harald Wilhelm said the shortage would be less severe next year.

Last week, Sweden’s Autoliv, the world’s largest maker of airbags and seatbelts, also said the shortage could linger into 2022.

Tavares also said on Wednesday Stellantis could, if needed, boost planned spending on electrification beyond the more than 30 billion euros through 2025 it previously outlined. He added it also could raise the number of battery plants it plans to build beyond five, or raise those plants’ planned capacity.

Stellantis will build three of the battery plants in Europe and two in North America, Tavares said. At least one of the North American plants will be in the United States and those sites will be announced before year end.

Tavares said he sees public acceptance of electric vehicles accelerating as concerns about climate change rise with events like the flooding in Europe.

He also said Stellantis was ahead on plans to achieve 5 billion euros ($5.89 billion) in annual cost savings from the January merger of Italian-American automaker Fiat Chrysler and France’s PSA.