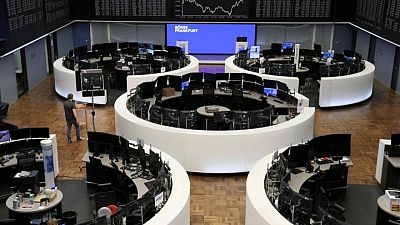 -A slew of upbeat updates from European blue-chip firms helped the region’s benchmark index posts its best session in 11 weeks on Wednesday and further recover from Monday’s sharp losses, while travel stocks roared back after weeks of declines.

The pan-European STOXX 600 index rose 1.7%, extending Tuesday’s small gains. Travel and leisure stocks jumped 3.7% after getting hammered recently by worries about a resurgence in COVID-19 cases.

Shares in peers ASM and BE Semiconductor rose about 3% each.

Leading the STOXX 600 risers was Swedish transportation equipment maker Thule after a second-quarter beat, while British fashion retailer Next jumped 7.5% on lifting its profit forecast.

Investors expect the European Central Bank to stick to a dovish tone at its policy meeting on Thursday, with investors looking for clues on what to expect in the September meeting. Earlier this month, it had unveiled a new strategy where it will tolerate higher inflation by targeting 2% inflation.

“The ECB dovish bias would suggest that the total reduction of the monthly purchases in 2022 will be less than previously expected,” said strategists at ING.

European companies listed on the STOXX 600 are expected to post a 115.2% jump in second-quarter profit versus a year ago, as per Refinitiv IBES data. While forecast for profit growth has consistently risen, many expect growth rate to peak in the second quarter.

The upbeat earnings reports helped investors look past worries about cooling global growth as many parts of Asia, Europe and the United States grappled with surging cases of the Delta variant.

“In the case of the likes of the UK and U.S. where vaccination levels are much higher, markets are banking that the vaccine wall holds back the virus enough not to overwhelm the respective healthcare systems of both countries,” said Michael Hewson, chief market analyst at CMC Markets.