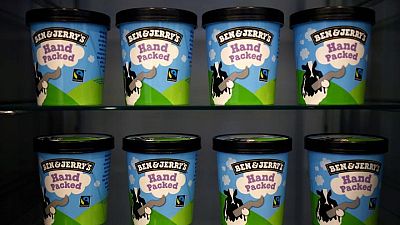 -American ice-cream brand Ben & Jerry’s on Monday said it would stop marketing its products in the occupied Palestinian territories, bowing to Palestinian pressure campaigns and saying that selling there was “inconsistent” with company values.

The South Burlington, Vermont-based company, which is owned by Britain’s Unilever Plc, has come under pressure from pro-Palestinian groups over its business in Israel and Jewish settlements in the West Bank, which is handled through a licensee partner since 1987.

More than 440,000 Israeli settlers live uneasily among some 3 million Palestinians in the West Bank, land that Israel captured and occupied in a 1967 war but which Palestinians say is the heartland of a future state.

Most countries consider Israeli settlements on Palestinian land to be illegal. Israel disputes this.

On Monday, Ben & Jerry’s said it would not renew its license agreement with its Israeli partner when it expires at the end of next year. It will, however, stay in Israel under a different arrangement, without sales in the Palestinian territories.

Unilever, in a separate statement, said it remains “fully committed” to its presence in Israel. It said it has always recognized Ben & Jerry’s right “to take decisions about its social mission”.

“We also welcome the fact that Ben & Jerry’s will stay in Israel,” Unilever said.

Ben & Jerry’s operates a manufacturing facility and two scoop shops in Israel, which it describes on its website https://www.benjerry.com/about-us/media-center/palestine-statement as being located “outside the occupied territories, just south of Tel Aviv.”

“We welcome the decision of any company to stop its work and investments in Israeli settlements,” Wasel Abu Youssef, a senior member of the Palestine Liberation Organization.

Israel’s Bennett said: “There are many ice cream brands, but only one Jewish state.”

“The boycott against Israel – a democracy surrounded by islands of terrorism – reflects a total loss of way. The boycott does not work and will not work, and we will fight it with full force,” he said.

The Israeli boycott, divestment and sanctions movement (BDS) welcomed the move as “a decisive step towards ending the company’s complicity in Israel’s occupation and violations of Palestinian rights.”

“Ben & Jerry’s, a leading socially responsible international company, is finally bringing its policy on Israel’s regime of oppression against Palestinians in line with its progressive positions on Black Lives Matter and other justice struggles,” it said.

Israel has said the BDS movement is motivated by a desire to paint Israel as illegitimate.

“Over 30 states in the United States have passed anti-BDS legislation in recent years. I plan on asking each of them to enforce these laws against Ben & Jerry’s,” said Israeli Foreign Minister Yair Lapid.

Vermonters for Justice in Palestine said in a provisional statement the move still “fail(ed) to address the widespread anger at the actions of the Israeli government against Palestinian people who live in occupied territory” and that “Ben & Jerry’s should completely disengage from Israel.”

Ben & Jerry’s was acquired by Unilever in 2000 in a unique deal that allows it to operate with more autonomy than other subsidiaries.

It is well known for its commitment to social justice https://www.benjerry.com/values that has recently included strongly supporting the Black Lives Matter movement, LGBTQ+ rights and electoral campaign finance reform.