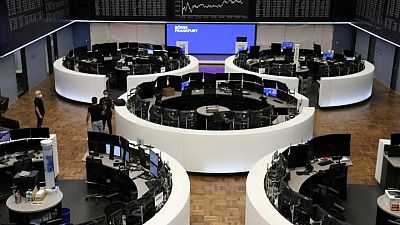 Siemens Energy slid 9.5% after it scrapped its margin target as Siemens Gamesa — its wind power division — was hit by higher-than-expected raw material and product ramp-up costs.

Siemens Gamesa fell 14.5%, on course for its worst session since July 2019, while shares in wind turbine maker Vestas slid 6.4%.

The STOXX 600 had hit a record high on Tuesday on economic recovery optimism and a strong start to the earnings season, but concerns about inflation have weighed even as policymakers from major central banks stick to a dovish policy stance.

“After a decent run higher, the U.S. earnings season may well have elements of buying the rumour, selling the fact with lots of good news priced into upcoming results,” Jeffrey Halley, senior market analyst at OANDA said in a note.

“Still, equities remain near record highs. So, despite the sideways shuffle last night, it really is business as usual.”

UK-based cybersecurity firm Avast Plc jumped 13.2% to the top of STOXX 600 after the company said it was in advanced talks over a merger with peer NortonLifeLock Inc.

That helped UK’s FTSE 100 stay afloat, while data showed the number of employees on British company payrolls surged in June by the most since the start of the pandemic.