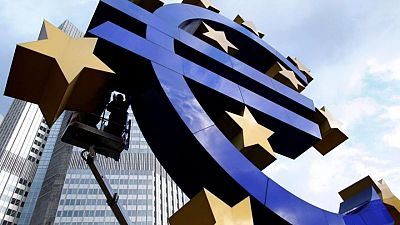 FRANKFURT -The European Central Bank took a first step on Wednesday towards launching a digital version of the euro, part of a global drive to meet growing demand for electronic means of payment and tackle a boom in cryptocurrencies.

An electronic equivalent of banknotes and coins, the digital euro will likely be similar to an account that euro zone citizens can keep at the ECB rather than a commercial bank.

While it probably will not feel very different from any online bank account or digital wallet, it will be intrinsically safer as the ECB cannot run out of euros, unlike a private company.

The ECB‘s Governing Council on Wednesday formally gave the go-ahead to the investigation phase of the project, which should last 24 months and be followed by three years of implementation.

The main aim of the initiative is to avoid leaving digital payments to the private sector, particularly if the use of physical cash starts dwindling, like it has in Sweden.

“Our work aims to ensure that in the digital age citizens and firms continue to have access to the safest form of money, central bank money,” ECB President Christine Lagarde said.

Work on a digital euro accelerated after Facebook unveiled plans to create its own currency in 2019, a potential threat to central banks’ core business.

Unlike Facebook’s proposed Diem or any other cryptocurrency, a digital euro would be backed by a central bank. The ECB is keen to get a piece of the digital action to guard against cash euros becoming obsolete should cryptocurrencies gain traction for real world spending.

“We cannot exclude that sometime in the future these coins might gain popularity and in that case the risk is that the possibility to use central bank money will be much lower,” ECB board member Fabio Panetta said.

The ECB said it had conducted experiments in the past year, finding “no major technical obstacles” with the digital euro’s ledger – which could be centralised, distributed or a mix of both – its privacy and safety, and offline use.

It will now start working on the design of the digital euro, consulting with stakeholders ranging from banks to retailers.

It also define the role for banks and fintechs, which will probably offer digital euro wallets to customers on the ECB‘s behalf.

The ECB will also start talks with European Union lawmakers to seek legislative changes that may be needed because the digital euro was not foreseen by EU Treaties.

“A discussion by the end of this year on policy objectives and uses of a digital euro … could be a good starting point,” Panetta told an EU lawmaker in a letter accompanying the decision.

German finance minister Olaf Scholz welcomed the announcement on Wednesday as did Bundesbank President Jens Weidmann and the country’s banking federation, a positive sign given the initial scepticism towards the digital-euro project in cash-fond Germany.