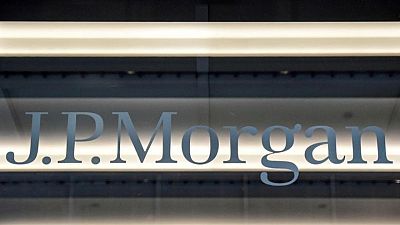 -JPMorgan Chase & Co second-quarter profits jumped 155% as the U.S. economy continued to rebound, but executives warned on Tuesday that the sunny outlook would not make for blockbuster revenues in the short term due to low interest rates, weak loan demand and a slowdown in trading.

Despite the stellar profits, JPMorgan’s shares fell 2.5% as investors focused on emerging challenges for financial stocks. Analysts pressed executives about competition from digital upstarts, prompting Chief Executive Jamie Dimon to exclaim at one point: “My God, the company is doing quite fine.”

The country’s largest bank, seen as a bellwether of the U.S. economy, was boosted by a surge in deal-making and the release of $3 billion it had set aside to cover feared pandemic losses, even as trading revenues slumped 28% from last year’s record-breaking levels.

As the national vaccination drive allows Americans to get back to work, JPMorgan’s results showed consumer spending bouncing back.

Combined debt and credit card spending was up 22% compared with the same quarter in 2019, when spending patterns were more normal. Travel and entertainment card spending returned to growth in June and was up 13% on the same period in 2019.

“We have bright spots in certain pockets and the consumer spend trends are encouraging,” Chief Financial Officer Jeremy Barnum said on a call.

He cautioned, however, that with corporate clients and consumers flush with cash thanks to extraordinary economic stimulus and low interest rates, core lending revenues may not benefit this year from the economy roaring back to life.

JPMorgan’s consumer and community banking unit reported an 8% fall in net interest income, while average loans were down 3%. And even as profits reached $11.9 billion, overall revenues fell 7% to $31.4 billion.

“Rates and loan growth continue to be headwinds,” Evercore ISI analyst Glenn Schorr wrote. He noted, however, that the jump in card spending and 9% organic growth in client investment activity were “clear signs that the economy continues to improve.”

JPMorgan’s corporate and investment banking revenues declined 19%, mainly due to a 44% slump in bond trading from last year’s high, which executives had warned was unsustainable. Buoyed by a boom in initial public offerings, equity markets were a bright spot with revenue up 13%.

On a call with executives, analysts questioned Dimon over the bank’s strategy to compete with digital upstarts at home and abroad – an area Dimon himself has said is a weakness for the industry – sparking frustration from the straight-talking CEO.

“Our bankers, our traders, our credit card, our debit card, our merchant services, our auto business, our digital, it’s doing pretty good,” he responded, acknowledging however that competition from tech-savvy players was “going to be very tough.”

JPMorgan is trying to crack Britain’s consumer finance market with slick technology-based offerings, while back in its home market President Joe Biden’s administration wants to make it easier for fintechs to muscle into the banking sector.

Asked whether JPMorgan would consider boosting its dividend, which it said last month would be $1 per share for the third quarter, Dimon said he wanted to invest in growing the bank.

“We don’t want to raise the dividend so high that it cripples [our] ability to do other things.”

Capital markets also remained active and a surge in IPOs more than compensated for a slowdown in blank check mergers.

The country’s largest lenders last year put aside billions to cover pandemic losses which, thanks to economic stimulus, did not materialize, allowing them to release those reserves.

Stripping out that boost, quarterly profit was $9.6 billion.