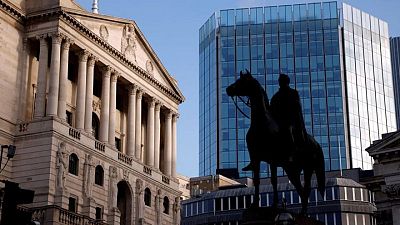 By Huw Jones and David Milliken

LONDON -The Bank of England scrapped its remaining pandemic curbs on dividends paid by HSBC, Barclays and other top lenders with immediate effect on Tuesday, saying its stress tests showed they could cope with the fallout from COVID on the economy.

Bank of England Governor Andrew Bailey said Britain’s rapid vaccination rollout had led to an improvement in the economic outlook, allowing the central bank to relax its controls on how much lenders can pay to shareholders.

“But risks to the recovery remain. Households and businesses are likely to need continuing support from the financial system as the economy recovers and the government’s support measures unwind over the coming months,” Bailey said in a statement.

Shares in British lenders rose, with HSBC , NatWest, Barclays , Standard Chartered and Lloyds all up by between 1% and 2%, compared with a 0.3% gain for the FTSE 100 index.

As Britain shut down much of its economy for the first time in March last year, the BoE told lenders to suspend dividends and share buy-backs until the end of 2020 and it also recommended scrapping bonuses for senior staff.

The BoE initially eased its curbs last December as the pandemic’s fallout became clearer, saying payouts could resume within “guardrails”.

The U.S. Federal Reserve said in June that large banks would no longer face coronavirus crisis restrictions on how much they can spend in buying back stock and paying dividends.

Bailey told a news conference on Tuesday that, unlike its move on dividends, the BoE had no plan to lift its guidance on bonuses. But Deputy Governor Sam Woods said it was important to get back to a “more normal setting” for bankers’ pay.

In its twice-yearly Financial Stability Report, the regulator sounded a new note of caution on cryptocurrencies, saying there were signs of larger institutions starting to get involved, which could lead to spillovers into the wider economy.

The BoE urged giant cloud computing firms not to be secretive about their operations. It fears that could hinder its checks on the stability of the banking sector, which is increasingly using firms such as Amazon, Microsoft and Google to improve efficiency and cut costs.

The FPC confirmed it would keep the counter-cyclical capital buffer (CCyB) for major banks at zero percent until at least December, meaning any subsequent increase would not take effect until the end of 2022 at the earliest.

The buffer is intended to rise and fall over the course of the economic cycle to limit lending at the top of a boom and boost it during a downturn.

“The FPC expects banks to use all elements of their capital buffers as necessary to support the economy through the recovery,” the BoE said.