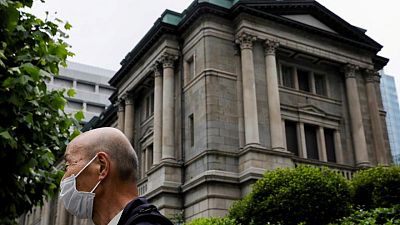 By Leika Kihara and Takahiko Wada

TOKYO – The Bank of Japan is expected to slash this fiscal year’s economic growth forecast in fresh quarterly projections due out next week, sources say, as prospects of another state of emergency for Tokyo threaten to dent consumption.

But the central bank is likely to maintain its view the world’s third-largest economy is headed for a moderate recovery as robust exports and output offset some of the weakness in consumer demand, said four sources familiar with its thinking.

The expected downgrade highlights Japan’s struggle to contain the COVID-19 pandemic, as slow vaccine rollouts and a resurgence in infections force authorities to declare a state of emergency for Tokyo just 16 days before the Olympic Games begin.

“The foundations of a recovery are in place, but the timing may be delayed somewhat,” as the curbs weigh on the economy’s expected rebound in the current quarter, one of the sources said, a view echoed by three other sources.

In most recent forecasts made in April, the BOJ expected the economy to expand 4.0% in the current fiscal year ending in March 2022, higher than a 3.6% growth projected in a Reuters poll.

At its July 15-16 policy meeting, the BOJ will likely cut the current year’s growth forecast in fresh quarterly and inflation projections, the sources said. It is also widely expected to keep monetary settings unchanged.

In the new estimates, the BOJ will likely revise up this fiscal year’s consumer inflation forecast mainly reflecting the boost from recent rises in energy costs, the sources said.

The growth projections for next fiscal year ending in March 2023 will depend much on when households begin to feel safe enough to boost spending on leisure and travel, analysts say.

The central bank currently expects the economy to expand 2.4% next fiscal year and 1.3% the following year.

The BOJ estimates that households have 20 trillion yen ($182 billion) in “forced” savings accumulated last year due to stay-at-home policies, which could be tapped when vaccines are rolled out widely.

Japan’s economy shrank an annualised 3.9% in January-March and likely barely grew in the second quarter, as the pandemic took a toll on service spending.

Analysts and policymakers had expected the economy to enjoy a solid rebound in the latter half of this fiscal year, in part hoping that steady vaccinations and removal of curbs would spur pent-up demand for leisure and travel.