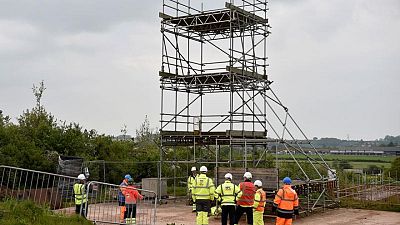 LONDON -The number of British staff on furlough fell to a new low last month as employers struggled to fill vacancies and consumers appeared to shrug off a new rise in COVID-19 cases, adding to signs of recovery as restrictions are lifted.

Britain’s economy has rebounded in recent months after 2020’s record slump, but some analysts worry that growth could be dampened by any further surge in coronavirus infections caused by the more contagious Delta variant.

Businesses reported that the proportion of staff on furlough dropped to 5% in the last two weeks of June from 6% in the first half of the month, the Office for National Statistics said.

Almost a third of workers were furloughed at the peak of the job-support programme in May 2020. The scheme is due to end on Sept. 30.

Many businesses are reporting difficulty recruiting staff, especially in sectors such as hospitality which shed employees during the pandemic and relied heavily on workers from the European Union before Britain left the bloc.

The Recruitment and Employment Confederation said businesses were hiring staff at the fastest rate since it started collecting records in the late 1990s.

Figures from recruiter Adzuna showed the number of online job adverts as of July 2 was 35% higher than in February 2020 – before the pandemic’s impact was felt in Britain – and up 4% on the previous week.

Though COVID-19 cases have hit their highest level since January, the government says it is confident the roll-out of vaccines means there will be fewer hospital admissions and deaths.

It plans to lift most remaining restrictions on public events and social distancing in pubs and restaurants on July 19, after a four-week delay intended to allow more vaccinations.

The economy as a whole is not expected to regain its pre-crisis size until the end of 2021, in contrast to the much faster recovery in the United States. Spending remains below pre-pandemic levels and a peak hit earlier this year.

Weekly Bank of England data showed consumer spending on credit and debit cards rose by 3 percentage points to 96% of its February 2020 level in the week to July 1 although it was below its level a month earlier.

Spending on socialising rose to 84% of its pre-pandemic level from 80% the previous week, but remained the weakest of the four main categories in the data.

A separate survey suggested Britons were again close to the recent peak level of confidence seen in May, when some COVID-19 restrictions were lifted. There was a dip in June when cases of the Delta variant rose.

The daily survey, conducted by data company Morning Consult https://morningconsult.com/2021/07/07/uk-consumer-confidence, showed consumer confidence in Britain was below pre-pandemic levels but had recovered quickly from the Delta dip, as it did after cases were detected of an earlier strain of COVID-19.

But consumers in Britain, as elsewhere in Europe, the United States and China, were showing signs of uncertainty about the longer-term effects of the pandemic on the economy, and this could limit spending growth, Leer said.