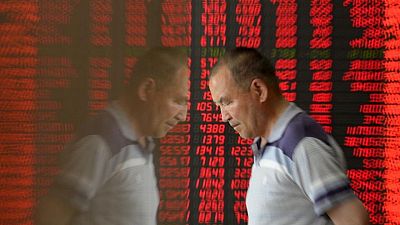 The U.S. index publisher identified 25 Chinese companies that would be deleted from its index on Aug. 2, while FTSE Russell said it will remove an additional 20 firms on July 28.

The decision is based on the feedback from index users and stakeholders, FTSE Russell said.

The move, based on an order signed by President Joe Biden on June 3 that expanded the scope of the ban, could deepen trouble for U.S.-listed Chinese firms already dealing with Beijing’s sweeping efforts to rein in its tech sector and enforce tighter data security efforts.

U.S. capital markets have been a lucrative source of funding for Chinese firms in the past decade, especially for technology companies looking to benchmark their valuations against listed peers there and tap into a big liquidity pool.

China, however, has cracked down in the past week on several firms looking to list in the United States with cybersecurity investigations.

Shares of Didi were down for the fourth consecutive day in U.S. premarket trading, after China ordered the app to be removed from mobile app stores.

Stocks to be removed from the FTSE Russell and the S&P Dow Jones Indices include aerospace-related companies such as Aerospace CH UAV, Avic Aviation High-Technology and Avic Heavy Machinery.

The stocks will be removed from FTSEGEIS, the FTSE Global China A Inclusion indices and associated indices.

The S&P had removed some Chinese stocks, including Luokung Technology Corp from its index, under a previous executive order. It said the companies are now eligible to be taken back under Biden’s new order.