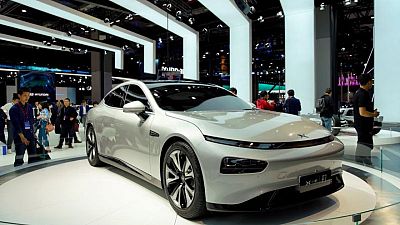 By Yilei Sun and Tony Munroe

BEIJING -Chinese electric vehicle maker Xpeng Inc shares fell by up to 3.5% in its $1.8 billion Hong Kong dual primary listing on Wednesday as the company said it would develop future models based on product platforms designed for international markets.

Xpeng shares opened 1.8% higher from the HK$165 per share issue price but the positive tone was short-lived.

Led by former Alibaba executive He Xiaopeng, the seven-year-old automaker is developing smart-car technologies including a smart cabin and autonomous driving. It is selling P7 and P5 sedans and G3 sport-utility vehicles.

Xpeng will roll out a new product platform with which it can develop several models of different segmentations and sizes, in two years, He told Reuters in an interview.

“The platform will be targeting the global market, meaning we will consider global auto regulations when we develop it,” He said. Like rivals Nio Inc and BYD, Xpeng is expanding global sales by shipping cars to Norway, where policies are supportive of EVs.

Xpeng is making its cars in two Chinese factories and is building two new plants. It is adding production hours at Zhaoqing, He said. Its prospectus shows Xpeng is planning an SUV model next year.

“Between 2025 and 2030, China’s auto industry might look like the current smartphone industry, which a few players dominate,” He, who previously founded a smartphone software company, said.

Xpeng will continue developing smart-car technologies, as well as a flying car that would also be able to drive on roads, He said, without giving a timeframe. The company already has a vertical take-off and landing (VTOL) prototype that is undergoing testing.

LightStream Research analyst Mio Kato, who publishes on Smartkarma, said the stock’s debut “looks a little weak” although this was expected given broader market weakness.

“Seems like just another indicator that it might not be possible to keep extracting capital from investors at the rates that were happening in 2019 and 2020,” he said.