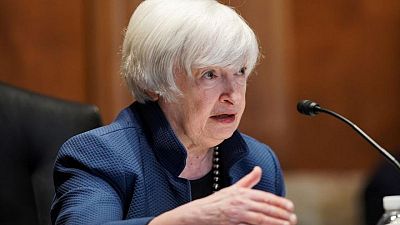 WASHINGTON – U.S. Treasury Secretary Janet Yellen will press G20 counterparts this week for a global minimum corporate tax rate above the 15% floor agreed by 130 countries last week, but a rate decision is not expected until future phases of negotiations, U.S. Treasury officials said on Tuesday.

The specific rate, and potential exemptions, are among issues still to be determined after 130 countries reached an historic agreement at a Paris-based Organisation for Economic Co-operation and Development (OECD) meeting last week. The countries outlined a global minimum tax and the reallocation of taxing rights for large, highly profitable multinational firms.

The deal is widely expected to be endorsed by G20 finance leaders when they meet on Friday and Saturday in Venice, Italy.

The Biden administration has proposed doubling the U.S. minimum tax on corporations overseas intangible income to 21% along with a new companion “enforcement” tax that would deny deductions to companies for tax payments to countries that fail to adopt the new global minimum rate.

The officials said several countries were pushing for a rate above 15%, along with the United States.

Yellen has been working with the tax-writing committees in Congress to include such provisions in budget “reconciliation” legislation, to align U.S. tax laws with the new international tax goals.

Democrats in Congress have said they plan to pursue such legislation, expected to include new social program investments and tax increases on U.S. corporations and wealthy Americans, without Republican votes if necessary. Republicans have vowed to fight any U.S. tax increases.

The officials said the Treasury’s legislative proposals for reallocating taxation rights have been carefully crafted to appeal to both Democrats and Republicans.

The plans mark a shift from traditional headquarters-based taxation to allow countries where the largest and most profitable U.S. firms sell products and services to tax a portion of those profits. The Treasury would also be able to tax part of the profits of large foreign firms selling into the United States.

The official said that the positives from the deal include ensuring no loss of U.S. tax revenues and ending foreign countries’ digital services taxes aimed at U.S. technology giants.

The Treasury officials added that Yellen is also making clear that a potential new digital levy expected to be proposed by the European Commission in the coming weeks to fund COVID-19 recovery is inconsistent with European Union commitments to the OECD framework agreement https://www.oecd.org/tax/beps/statement-on-a-two-pillar-solution-to-address-the-tax-challenges-arising-from-the-digitalisation-of-the-economy-july-2021.pdf signed on July 1.