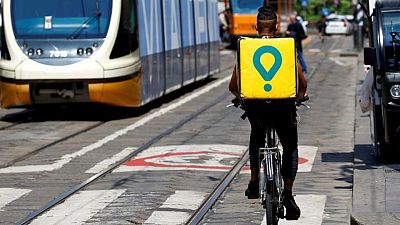 MILAN – Italy’s data protection authority on Monday ordered the delivery firm Foodinho, owned by the Spanish start-up Glovo, to change the computer algorithms used to manage staff to avoid any discrimination, after finding breaches of privacy and labour laws.

The move comes as a debate on how to regulate workers’ rights in the digitised “gig economy” is unfolding around the world. The European Commission has opened a public consultation on potential EU-wide rules.

Trade unions say management algorithms on international platforms are eroding gig workers’ wages and rights, just as lockdowns to contain the COVID-19 pandemic have increased demand for casual workers such as delivery drivers.

The watchdog, Garante, said it had ordered Foodinho to pay a 2.6 million euro ($3.1 million) fine after an investigation of its management of its 19,000 riders in Italy, as well as other online delivery platforms.

It said the company had not explained its automatic order management system properly to its workers, and had failed to ensure that the results of automatic processes to evaluate the workers’ performance were correct.

Foodinho also failed to provide workers with ways to challenge decisions made using the algorithm, including the exclusion of some riders from taking orders, the authority said.

Glovo, which is based in Barcelona and operates its services in Italy through Foodinho, had no immediate comment.

The firm delivers everything from food to household supplies to some 10 million users across 20 countries.

A court in Spain ruled last year that Glovo workers were employees and not freelancers, while the Spanish government is proposing legislation to give unions access to the algorithms that tech companies use to manage their workforces.

And in February, Britain’s Supreme Court found that a group of Uber drivers were entitled to worker rights such as the minimum wage. ($1 = 0.8434 euros)