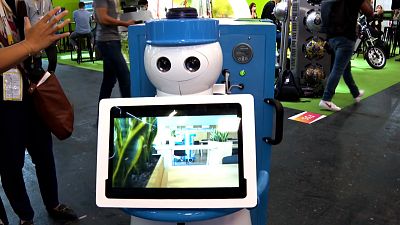 The Kompaï robot at VivaTech Paris. Its creators hope the robot will be used in healthcare settings.   -   Copyright  Euronews
By Pascale Davies  •  Updated: 06/07/2021

The coming years will see older people make up a much larger demographic in Europe, a phenomenon that is already being felt in countries like Italy, Greece and Germany.

The prospect presents enormous challenges to policymakers tasked with meeting the healthcare needs of an ageing population, particularly in a situation where there may be fewer working-age people to support them.

As a result, policymakers in Europe are turning their attention to tech solutions and robotics in the hope that they can help make up some of this shortfall.

French start-up Kompaï Robotics presented their latest innovation at the VivaTech conference in Paris - a robot that has been specifically designed for healthcare providers.

‘It’s a multifunctional robot designed for vulnerable people. So that could be in retirement homes and also in hospitals,” Marie Fromanger, a business developer at Kompaï Robotics, told Euronews Next.

‘The idea is to help carers and the whole body of healthcare workers in the daily tasks that a robot can carry out.’

It can also do all kinds of art therapy, activities, and some meditation. It can transport people thanks to the fact that it can move on its own.

Their new model has been designed for use in the home and is equipped with auto-navigation, meaning the robot is able to carry out ‘surveillance sweeps’ and alert a support person by sending a photo if anything is amiss.

“It can also do all kinds of art therapy, activities, and some meditation. It can transport people thanks to the fact that it can move on its own,” said Fromanger.

The company is keen to stress that its robots are not intended to replace carers or health workers entirely. Rather the Kompaï robot is “an additional tool” to relieve carers of the menial tasks that a robot can carry out autonomously.

Kompaï is one of the many European technology companies working with the SHAPES programme, a large scale EU funded health care project which aims to assist people to remain independent as they age.

The programme is seeking to create an open platform for integrating digital solutions and technological infrastructure that will ultimately support healthy ageing across the continent.

According to Europe’s statistics agency Eurostat, it is projected that there will be close to half a million centenarians in the EU-27 by 2050.