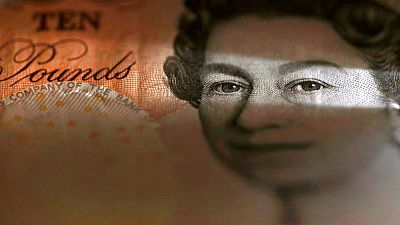 LONDON -Sterling rose 0.9% against the dollar on Monday, re-emerging from an overnight fall to its lowest level versus the dollar since April after the U.S. Federal Reserve surprised the market with a hawkish tone last week.

“I think what we’re seeing today is a minor retracement in high beta currencies across the board. The moves look tentative, however, as I don’t think the dust has fully settled in FX markets post-Fed,” said Simon Harvey, Senior FX Market Analyst at Monex Europe.

A more optimistic economic assessment from the Bank of England, which next meets on Thursday, could push sterling towards $1.40 quicker, he added.

Britain’s top central bank officials look set to remain divided over whether to pull the plug on their 875 billion-pound ($1.2 trillion) government bond purchase programme, after inflation hit its highest in nearly two years.

Data showed that asking prices for British homes between mid May and early June rose by 0.8% compared with a month before, the biggest rise for the time of year since 2015, property website Rightmove said.

In the meantime, investors brought forward bets that the BoE would raise interest rates sooner than they thought previously, flattening the yield curve for British government bonds and mirroring a recent move in U.S. Treasuries.

Currency markets are fully pricing in a 30 basis point hike in rates by the BoE by December 2022.

Investors are also watching a dispute between Britain and the European Union over post-Brexit trade in the British province of Northern Ireland.

Versus the euro, sterling rose 0.4% to 85.63 pence, after closing on Friday its worst week against the single currency since April.