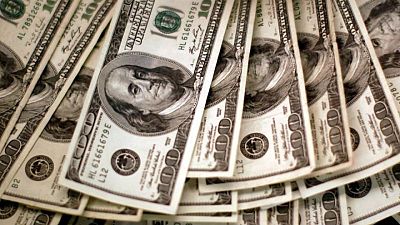 LONDON – The dollar held on to the previous week’s gains on Monday after the Fed’s surprise hawkish tilt, while bitcoin tumbled as China stepped up its crackdown on mining of the cryptocurrency.

The dollar index was broadly flat on the day after a leap of 1.9% last week – the most since March 2020 – as the U.S. Federal Reserve signalled a sooner-than-expected end to its ultra-easy monetary policy.

The index, which tracks the greenback against six major currencies, dipped slightly to 92.221 from a high of 92.405 reached on Friday, a level not seen since April 13.

The Fed’s hawkish stance has weighed on risk sentiment since, including for stock markets, while boosting currencies seen as safe havens including the dollar and the Japanese yen.

The yen strengthened further on Monday, up a quarter of a percent versus the dollar at 109.97 per dollar, while the euro was broadly flat.

“The Fed’s hawkish policy shift has brought an abrupt end to the recent period of low volatility and narrow trading ranges for G10 FX,” currency analysts at MUFG said in a note.

“The Fed has encouraged market participants to price in more rate hikes into next year lifting US short rates and the USD.”

The Fed’s policy stance has become a tailwind for the dollar and will be a challenging backdrop for risk assets, Westpac analysts said.

While the dollar index has the scope to test highs reached in March after its recent gains, “there’s not enough juice for a sustained medium-term breakout beyond that”, they added.

Analysts at Goldman Sachs agreed the dollar’s gains may not be sustained, noting other central banks will need to consider policy normalisation too as their economies recover from the blow of the pandemic.

In cryptocurrencies, bitcoin’s poor recent run continued with an 8% drop below $33,000, as China expanded restrictions on mining to the province of Sichuan.

Cryptomining is big business in China, accounting for more than half of global bitcoin production.