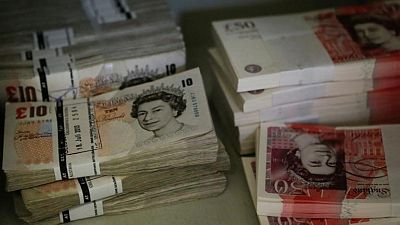 LONDON – Sterling extended its fall against the U.S. dollar on Friday, dropping below $1.39, hurt by the U.S. Federal Reserve’s hawkish surprise and an unexpected fall in Britain’s retail sales.

The pound dropped against a strengthening dollar on Thursday after the Fed surprised markets by signalling it would raise interest rates and end emergency bond-buying sooner than expected.

British retail sales fell 1.4% between April and May as a lifting of lockdown restrictions encouraged spending in restaurants rather than shops. The data did not have clear impact on the pound.

“GBPUSD remains bogged down below the 1.39 handle by a confluence of broad USD strength and a slight deterioration in near-term data,” said Simon Harvey, senior FX market analyst at Monex Europe.

“The limited impact of the data on sterling is largely because retail sales volumes remain above pre-pandemic levels and a shift in consumption patterns towards services after the May 17th reopening was always likely.”

For cable, market participants are weighing up the Bank of England and the Fed’s relative pace of possible monetary policy tightening. The BoE next meets on June 24.

BofA strategists said in a note to clients that it changed its view on the central bank’s tightening trajectory and now expects a 15 basis point rate hike in May 2022, compared to previously expecting no hikes in 2022.

Investors are also watching a dispute between Britain and the European Union over post-Brexit trade in the British province of Northern Ireland, which has a land border with EU member Ireland.[nL2N2O01E6]

“Brussels’ patience with London’s having its cake and eating it is wearing thin. Indeed, there is a risk of protocols being triggered and tariffs being threatened more seriously,” wrote ING strategists in a note to clients.

British Prime Minister Boris Johnson said he was very confident that he would be able to lift remaining coronavirus restrictions on his new target date of July 19, based on the most recent data.