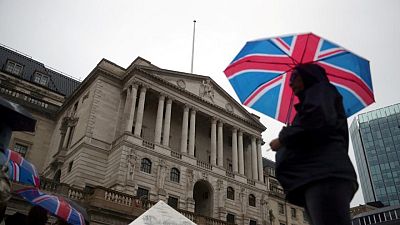 LONDON – British inflation can rise above 3% before the Bank of England feels discomfort, according to a Reuters poll of economists who also said the economy would expand faster than previously thought this quarter as more pandemic restrictions are lifted.

The central bank has a 2% inflation target, but the rate unexpectedly jumped above that in May for the first time in almost two years and hit 2.1%, part of a post-lockdown climb in prices that is expected to gather pace.

Inflation will peak at 2.4% in the final quarter of this year before gradually scaling down, the June 14-17 poll found. The Bank will tolerate it at 3.0-3.5% before feeling discomfort, medians showed.

“We think high inflation will be temporary as this year’s price rises give way to a sharper fall in inflation next year due to base effects,” said George Buckley at Nomura.

“At the same time, we expect the BoE to be keen to protect what could prove to be a fragile recovery, with output well below its pre-pandemic path.”

Britain has suffered the highest COVID-19 related death toll in Europe, but a fast-moving vaccine roll-out has allowed the government to open up parts of the economy and lift some of the stringent restrictions imposed to stop the virus from spreading.

While the government delayed a further easing of restrictions by a month on Monday because of the rapid spread of the more infectious Delta coronavirus variant, it was not expected to have a big impact on the overall economy.

“As long as the restrictions are eased in the next few months, then there would still be a pretty good chance that COVID-19 won’t significantly reduce the future level or growth rate of GDP,” said Paul Dales at Capital Economics.

Like its peers the Bank of England eased monetary policy at the start of the pandemic last year, cutting the bank rate to a record low of 0.10% and restarting its quantitative easing programme.

None of the 67 economists polled expected any change to borrowing costs when the Monetary Policy Committee meets on June 24.

It will be 2023 before the Bank raises rates, medians in the poll showed, but with inflationary pressures increasing and the growth outlook improving, more economists now expect an earlier move than previously.

While the earliest expectation for a hike was not until Q3 2022, nine of 50 economists in the latest poll predicted an increase before the end of next year compared with four of 35 last month. The median for end-2023 was lifted to 0.50% from 0.25%.

“The debate on whether or not to raise bank rate at some point next year looks set to become more finely balanced. And, if the upside surprises continue, calls for a rate rise on the MPC may grow louder,” said Chris Hare at HSBC.