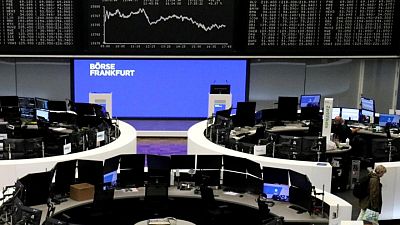 – European shares closed at a record high on Wednesday, despite caution ahead of a U.S. Federal Reserve meeting that could see it outline plans to start stimulus unwinding.

The pan-European STOXX 600 was up 0.2% to a record high of 459.86 points, marking its longest gaining streak in three-and-a-half years with a ninth straight positive session.

Travel and leisure, utilities and chemical stocks were the best performers, as investors bet on a jump in consumer demand and industrial production.

But banks fell 0.9% on stock price losses in Banco Sabadell, Santander and Caixabank, after Spain’s competition watchdog opened an investigation into possible anti-competitive practices in the marketing of state-backed coronavirus loans.

The Spanish bourse lagged its regional peers for the day, falling 0.3%.

The benchmark STOXX 600 index has now risen for five straight weeks, with a steady vaccination programme expected to jumpstart regional economic growth. But a recent rise in inflation has sparked concerns of a sooner-than-expected tightening in global monetary policy.

After dovish signals from the European Central Bank last week, the Fed is expected to at least flag the pending start of talks about when and how to exit from policies put in place at the onset of the COVID-19 pandemic.

“The Fed is expected to leave policy unchanged and again play down taper talk. Nonetheless, markets will be looking for hints on whether the Fed is starting to acknowledge that inflation may not be as transitory as thought,” analysts at ING wrote in a note.

In Europe, travel and leisure stocks rose 1.3% after steep losses on Tuesday, while utilities added 1%.

London’s FTSE 100 rose 0.2% even as data showed British inflation unexpectedly jumped above the Bank of England’s 2.0% target in May and looked set to rise further as the country re-opens its economy from lockdowns. [.L]