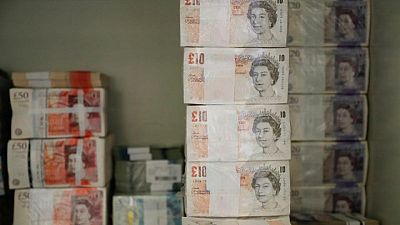 LONDON – Sterling rose on Wednesday after data showed British inflation unexpectedly jumped above the Bank of England’s 2% target in May, sparking concerns that policymakers may start signalling a shift in policy thinking if prices shoot up again.

Inflation hit 2.1% in May, outpacing forecasts, and looks set to quicken further as the country re-opens its economy after the coronavirus lockdowns.

While the rise in inflation is largely driven by local factors, the BoE will be keenly watching whether a stronger currency will help ease price pressures.

The British currency is one of the best performing currencies versus the dollar this year with a net 3.3% rise so far in 2021.

“This transient inflation surge explained away by many central bank chiefs is at risk of becoming something more permanent or at least that continues to be the overhanging concern for markets,” said Charles Hepworth, investment director at GAM Investments.

Traders now turn their attention to the BoE’s monetary policy committee (MPC) meeting next Thursday, where it is expected to leave policy unchanged. The BoE has said it expects inflation to hit 2.5% by the end of this year before settling back to its 2% target.

“Recent comments suggest some concerns are possibly starting to seep into the MPC‘s thinking regarding just how strong these downward pressures might turn out to be: if employment levels hold up as the furlough scheme ends then we could start to see the MPC‘s message become increasingly less-dovish,” said Stuart Cole, head macro economist at Equiti Capital.