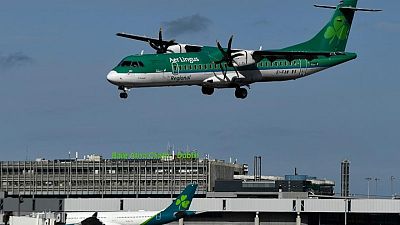 DUBLIN – Irish airline Stobart Air, which provided regional services in Ireland and Britain under the Aer Lingus Regional brand, has ceased trading and is in the process of appointing a liquidator, its owner said on Saturday.

Aer Lingus said in a statement that all Aer Lingus Regional flights operated by Stobart Air, including routes to Edinburgh, Manchester and Belfast, had been cancelled.

Before the COVID-19 pandemic grounded much of its fleet of 13 turboprop planes, Stobart operated around 900 flights per week across 30 routes in Ireland, the United Kingdom and Western Europe, most of them under the Aer Lingus Regional brand, according to its web site.

“The Board of SA (Stobart Air) has terminated its franchise agreement with Aer Lingus, will cease trading and is taking steps to appoint a liquidator,” Stobart’s owner, British aviation and energy infrastructure group Esken, said in a statement.

Esken was known as Stobart Group before it changed its name earlier this year.

Esken in April said a proposed sale of Stobart Air to Isle of Man group Ettyl Ltd had been delayed due to financing issues. On Saturday, Esken said Ettyl had been unable to conclude the transaction.

Esken said a decision by Aer Lingus to award preferred bidder status to another party for the Aer Lingus Regional franchise agreement beyond its expiry at the end of 2022 had significantly hampered efforts to secure a future for the business.

Esken said it would sublease eight ATR aircraft operated by Stobart Air until the leases lapse in 2023.