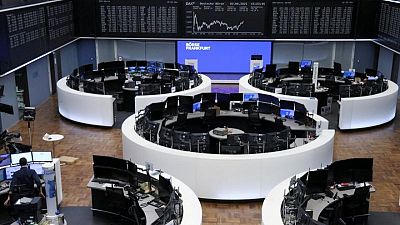 By Herbert Lash and Tom Wilson

Investor sentiment rose in Europe after the European Central Bank raised its growth and inflation projections on Thursday, and also renewed a pledge to keep stimulus flowing.

The pan-regional STOXX Europe 600 index rose 0.7% to a record close, posting its sixth straight session of gains and best weekly performance at 1.1% since early May.

The MSCI all-country world equity index, a benchmark that tracks shares in 50 countries, set a new intraday high and record close at 719.52, up 0.2% in a late-day surge that also lifted the S&P 500 to an all-time close.

Stocks on Wall Street seesawed most of the session near breakeven as investors bought tech stocks after shrugging off data on Thursday that showed year-on-year inflation spiked to 5.0% in May, a jump the Federal Reserve has said is transient.

Declining Treasury yields have confounded investors who see signs of inflation being more persistent than the Fed’s view that sharply rising consumer prices will be short-lived.

“You’ve seen an increasing comfort level with the Fed’s stance that inflation is going to be transitory, and as that sinks in, you continue to see large buyers of bonds, which is keeping yields from rising,” said Michael James, managing director of equity trading at Wedbush Securities in Los Angeles.

Inflation data has alarmed many investors, but for the moment the reaction is stocks are still preferable to bonds in an inflationary environment, said Rick Meckler, partner at Cherry Lane Investments in New Vernon, New Jersey.

“There is a concern that eventually you could get some migration out of stocks into bonds,” Meckler added. “But right now we seem to be at that pre-tipping point where bonds don’t yield enough to scare people out of stocks.”

Jack Ablin, chief investment officer at Cresset Capital Management, said he is concerned about the long-term outlook for equities because of stretched valuations once interest rates start to rise, perhaps starting in late in 2022.

“Value-oriented cyclical companies with good quality balance sheet are probably the best deal in this kind of market,” Ablin said.

Yields on 10-year U.S. Treasury notes slid 0.5 basis points to 1.4535% after earlier declines that positioned the benchmark for its biggest weekly decline in a year.

Falling expectations that higher inflation could lead to early Fed tightening prompted a flattening of the U.S. yield curve, with the spread between the 10-year and 2-year yield at its narrowest since late February on Friday.

“We still think consumers are going to help prices higher, when these economies reopen properly, that people can start traveling again, spending again,” said Jeremy Gatto, investment manager at Unigestion. “We are going to get a further boost from the consumption side, and we therefore expect bond yields to move higher.”

The euro and sterling dipped against the dollar as investors bet interest rates would stay lower for longer in Europe.

Oil prices rose to multi-year highs, heading for a third straight week of gains on the improved outlook for worldwide demand as rising vaccination rates lead to a lifting of pandemic curbs.