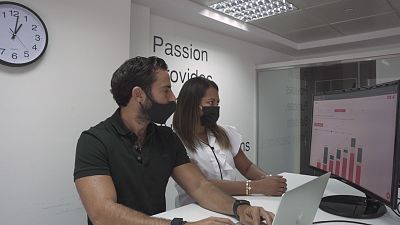 As a hub connecting the east and west, Dubai offers unrivalled access to the rest of the world and the diverse population within. Formerly dependent on oil, it now forms less than 1% of the city's GDP.

Dubai Chamber is a semi-government organisation that offers support to those wanting to set up a business. Its entrepreneurship arm, Dubai Start-Up Hub, assisted over 2000 entrepreneurs last year.

Natalia Sycheva, the Senior Manager of Entrepreneurship at Dubai Chamber told Euronews that Entrepreneurs are no different than any other person in the world who is “looking for a nice environment where you have access to the entertainment, educational facilities and definitely having that ease of setting up the business”.

In Q1 of this year, Dubai economy issued over 15,000 new licences. That is a growth of 19 per cent compared to Q1 of 2020. The licences issued in Q1 this year were for professional, commercial and tourism and industrial activities.

Since 2019, athleisure brand L'Couture has grown from local success to global business with its own store in the city.

Lyndsay Doran, Founder & CEO of L’Couture, set up the business after she saw “a huge gap in the market” for comfortable, high quality, but affordable activewear.

Back in 2019, Lyndsay Doran had never opened a business before.

“So I was just learning on the job. But I think it's been very supportive here as a female founder,” she said.

Dubai is keen not just to increase the number of start-ups, but also to nurture and develop those businesses and to build more success stories.

Data platform Magnitt tracks every investment that takes place in the venture capital and Start-Up space.

The Founder & CEO of MAGNITT, Philip Bahoshy, said governments and corporates at all levels are very interested in innovation and start-ups.

Incubator Intelak was set up to support and launch start-ups in the aviation, travel and tourism industry.

Yousuf Lootah, Executive Director of Development & Investments at DTCM said they have “awarded about 1.4m AED (310,000 euros) in equity free seed money to these businesses.”

One of Intelak's success stories was Dubz, a business that helps travellers clear their luggage before heading to the airport.

Yousuf Lootah said “We helped them with the market research, finding what the right sweet price point is. Due to that initiative, they got a majority stake bought by Dnata Group into them, and that opened up 90 global hubs.”

Dubai has just issued guidelines on 100 per cent ownership for foreign investors.

The UAE also has one of the lowest tax rates across its competitor countries with nil rate of corporate tax and five per cent VAT.

The Emirates vision is to embrace a future dominated by technological and research-based industries and become the Start-Up Capital of the world.