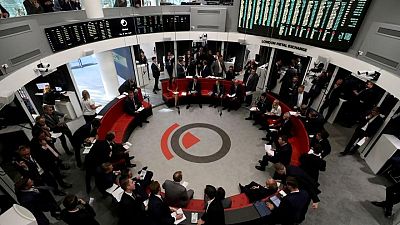 By Pratima Desai and Eric Onstad

LONDON -The London Metal Exchange has abandoned proposals to close its open outcry trading floor, the last such venue in Europe, it said on Tuesday, but added it believes electronic trading is the future.

The floor was closed in March 2020 for the first time since World War II to allow for social distancing needed to deal with COVID-19, silencing its red ring of seats and the theatre of arcane hand signals and frenzied shouting by traders.

In January, the world’s oldest and biggest marketplace for industrial metals launched a consultation process on closing its open-outcry trading floor, arguing that the forced migration to digital trading was a success.

“The divergent views in response to the Discussion Paper were particularly apparent between traditional participants and some smaller physical clients on the one hand, and our larger merchant trader and financial participants on the other,” LMECEO Matt Chamberlain said..

The LME received 192 responses to its consultation, an unprecedented number.

The LME also proposed in its consultation paper a switch in the methodology for calculating clearing margins to a realised variation model (RVM) from the existing contingent variation model (CVM).

But it has committed to retain CVM in the medium term and will embark on a feasibility study that will look into recreating the cash flows of a CVM model for RVM contracts, the exchange said.

“(This) could support the traditional brokerage community in the provision of credit to their smaller physical clients.”

Physical market participants prefer CVM because cash flows do not have to be managed daily, only when contracts expire.

Under the RVM model, margins are held by clearing houses, which returns positive margin balances daily and call for margin in lieu of negative balances. It would require small and medium-sized firms to lock up more capital.

RVM is used for most exchange-traded and centrally cleared contracts. Financial participants, such as funds, prefer RVM because they receive daily positive balances, or cash, that can be deployed elsewhere.

Depending on the outcome of a consultation issued today, official or settlement prices — those traded between 1230 and 1350 London time — will be determined in floor trading, which will resume on September 6, to support physical customers using these prices in their contracts.