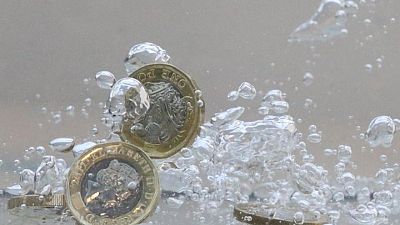 LONDON – Sterling eased against a broadly stronger dollar on Tuesday, with no significant data releases on the economic calendar leaving analysts focused on the British government’s forthcoming decision on fully reopening the economy.

The pound has been trading in a consolidation pattern against the dollar for three weeks now, largely caught between the $1.41-42 range. Analysts say its recent movements have been largely dollar-driven, as strong incoming U.S. economic data leaves investors skittish about potential tightening from the Federal Reserve.

Sterling is the second best-performing G10 currency against the dollar this year, lagging only the commodity-driven Canadian dollar, and has been propelled by bets on a faster reopening of Britain’s economy on the back of its vaccination programme.

Those hopes have faded somewhat in recent weeks however, as rising cases of the Delta variant of COVID-19 first detected in India have led to calls from some scientists to push back the reopening date.

Health minister Matt Hancock said on Sunday it was “too soon” to say whether the June 21 plan could go ahead.

“There aren’t really any market-moving data releases this week in the UK, and expectations ahead of the Government’s announcement on 14 June on whether to go ahead with further easing of Covid-19 restrictions on 21 June may remain the main theme to follow,” strategists at ING said in a note.

“Still, we doubt a potential delay of full re-opening will be able to materially weigh on sterling.”

ING also observed in a note on Monday that weekly volatility in sterling positioning has not been accompanied by outsized moves in the spot market, which suggests that the swings may be related more to reporting technicalities than actual changes in market sentiment on the currency.

Speculators decreased their net short dollar positions last week, according to calculations by Reuters and U.S. Commodity Futures Trading Commission data released on Friday. [CFTC/] [IMM/FX] However, overall positioning on sterling remains net long, which means that the market is on balance betting for it to make gains.

British retailers reported a big boost in sales in May, after lockdown measures ended the month before and a relaxation of COVID restrictions on hospitality drew more shoppers into town centres, industry data showed on Tuesday.

The British Retail Consortium said total sales among its members, who include supermarkets and high-street chains, were 10.0% higher last month than in May two years ago.